Historians at the Institute for the Study of Totalitarian Regimes have announced they recently uncovered previously unknown video footage in the archives on the events of 1989. Footage shot – and heavily manipulated - by the former regime’s secret police, the StB. Carefully presented images and a propagandistic voice-over in the “documentary” were meant to give a diametrically different picture of public demonstrations which shook the country 21 years ago, suggesting they were a provocation and a sham. Swiftly overcome by events, though, the Communists soon shelved the material, and it was subsequently forgotten. 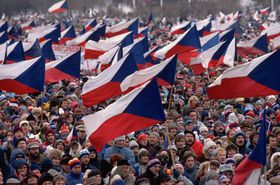 November 1989 in Prague, photo: Peter Turnley, Public Domain A little earlier I spoke to Vojtěch Ripka of the institute and he told me more about the footage shot by the StB:

“It’s a 35-minute cassette that must have been part of much more material and it’s difficult to determine how some of it was put together. One of our experts in Communist propaganda estimates the footage was produced between November 21, 1989 and the 26th but there’s not much more we can say about the production of this material.”

Of course, over those says the Velvet Revolution only intensified… So if I understand you correctly this material is not complete, it was never made into a finished product?

“That’s right, it’s just a fragment and it doesn’t appear it was ever used a ‘whole’. But during the first days of the outburst of the revolution the secret police – like everyone else – had no idea how far the events would lead. Had the Communists crushed the revolution this material would have been used as an alternative scenario, as a way of presenting the demonstrations.”

The Communists, had they stayed in power would have then presented that ‘alternate’ history on TV, do you think?

“Yes. First they tried to make into TV propaganda but then they turned it into internal material only for the secret police.”

Who will be able to see the material now? Will it be released on DVD for use by high schools, for example?

“It is accompanying material on a DVD released by the institute, with about 80 clips. All of the clips are available for use by teachers. What is special about it is that since it is a fragment you can see some of the methods in a raw state. Also because the main interpretation is completely opposed to what really happened it is very valuable for teachers and pupils to see how media works.”