Tourism is one of the Czech Republic's biggest industries, with around six million people visiting the country every year from all over the world. In order to maintain - and even expand - tourism in this country, the Association of Czech Travel Agencies has teamed up with the Local Development Ministry and CzechTourism. Their approach: to improve services, and persuade visitors to both stay longer and get out of Prague and visit the regions.

I discussed this new strategy with a representative of the Association of Czech Travel Agencies, Tomio Okamura, who is Czech-Japanese and brings tens of thousands of Japanese tourists to the Czech Republic every year.

"Now 15 years after the Velvet Revolution we are at the point where all tourists, especially from Europe, who wanted to visit the Czech Republic have already visited. So now we must address problems such as a lack of information in English, problems with taxi drivers and so on, to invite this type of clients to the Czech Republic again. And to make their stay longer." 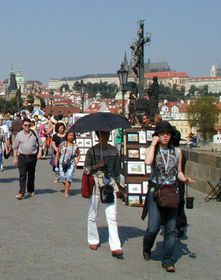 Earlier you were comparing inspectors on public transport to pickpockets - what did you mean by that statement?

"Yes, they seem very, very similar because pickpockets and inspectors choose people according to three points: if they are small, if they have a lot of money and if they won't take any action in response.

"So inspectors on public transport usually choose for example Japanese clients, because they have money, they are small and they don't take any action - they just pay."

What are the particular problems Japanese tourists find here in Prague?

"First of all it is another culture. In the Czech Republic there is a stone culture, but in Japan there is a wood culture. First of all they like Prague, and they are glad that they are here - at the moment that is much stronger than a feeling that they have problems. 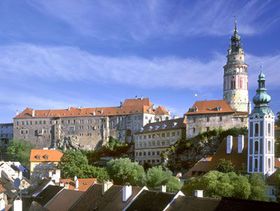 Cesky Krumlov "But as I told you before now we are at an important point that we must improve, improve services. From the point of view of Japanese clients, they don't like the behaviour of people who are working in services. Which means waiters in restaurants, taxi drivers and everybody who works in the tourist industry."

How do you hope to bring more tourists out of Prague and to the regions?

"It is a big problem, because there aren't four-star hotels in the regions. We have 12 UNESCO towns but only in two of them are there big four-hotels, Prague and Cesky Krumlov.

"So now we are working with the ministry, and I've heard they will try to prepare some programme, some incentive programme for new investors to build some new hotels. And then we can improve the situation in the regions."