The Lidice museum, which stands on the site of the Czech village that was infamously razed to the ground by the Nazis in 1942, opened a new education centre on Monday. Among other things, this facility will give visitors and scholars access to a detailed historical archive of material about what is considered to be one of the most notorious Nazi atrocities of the Second World War.

The German massacre of the Czech village of Lidice in retaliation for the assassination of Reichsprotektor Reinhard Heydrich during WWII still resonates around the world today as a byword for cold-hearted Nazi brutality.

On the morning of 10 June 1942, Nazi troops stormed into Lidice and forcefully removed the villagers from their homes. All the men over 15 years of age were lined up against a wall and shot while the women and children were transported to concentration camps. 173 people died that day and 167 more subsequently perished in German detention facilities. The village itself was completely razed to the ground, with the Nazis even digging up the graves of the local cemetery before levelling it.

Now the commemorative monument, park and museum that stand on the site of the tragedy today are to be complemented by a modern education centre, which is designed to cater for the increasing number of school groups and students who currently visit Lidice.

Naděžda Rezková-Přibylová is one of the educational coordinators behind the new facility:

“There’s a clear reason for the establishment of the education centre. Essentially it complements and contextualises the museum, because the museum exhibition has been designed to have an emotional impact, which seems to really work if the reactions of visitors are anything to go by. Of course, at the same time the museum’s creators have been aware of the need to go one step further and create something that caters for people who want more detailed information and who wish to find out more about the actual history of Lidice.”

The new education centre has an exhibition room with photographs and detailed multilingual descriptions of the tragic events that occurred in Lidice. There is also a state-of-the-art classroom with computers which students can use to access an extensive digital archive of photos, documents and other materials about the village.

At the moment, this valuable archive is only in Czech but there are plans to make it available in English and German for the benefit of the large number of foreign student groups who now visit Lidice. The education centre will also hold regular international conferences and seminars on the impact of Nazism in Europe to help put Lidice in a wider context.

Some of the small number of villagers who survived the Lidice massacre attended a sombre opening ceremony for the new education centre on Monday.

These included Jaroslava Skleničková, one of just a handful of Lidice children who survived the massacre in 1942. Now over eighty years of age and confined to a wheelchair, she still accepted an invitation to attend the opening of the facility, which she says is a very important addition to the Lidice memorial.

“Young people will have an opportunity to come here and work on the computers and study all the things that happened. They will have a chance to take an in-depth look at the events that occurred in Lidice. This is really important, especially when you see how Nazism is now on the rise again.”

Standing on the site of the tastefully designed education centre beside the park that once was Lidice, it is hard to reconcile the picturesque surroundings with the horrors that occurred here six decades ago. 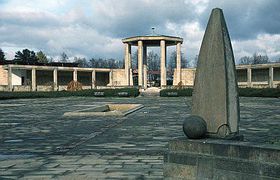 Naděžda Rezková-Přibylová says that the wide open spaces of the park where Lidice once stood should have a powerful effect on students who visit the museum and education centre:

“The fact that the memorial is right here – where the events actually happened – is something really unbelievably powerful, even for the children who visit. Paradoxically we end up showing the children an empty space. We effectively show them nothing and then we tell this is what happened. The emptiness that you find here is testimony to the events that occurred in this place.”