Silesia, a Pearl in the Bohemian Crown - is a new exhibition that is currently underway in Prague. As Dita Asiedu reports, paintings, sculptures, drawings and prints illustrate the artistic relations among Silesia, Bohemia and Moravia from the 14th to the 18th century:

A walk through the Wallenstein Riding School proves that the region of Silesia can pride itself with a rich cultural tradition. The 400 works exhibited here represent three different periods. The first part of the exhibition looks at "The Golden Age of Luxemburg Rule" and is devoted to the flourishing development of the Gothic style under the reign of the Luxembourg dynasty. From works by artists of Bohemian origin to donations of Bohemian art to Silesian monasteries and convents, this section has many jewels says Vit Vlnas, the main curator:

"One example is what has been left of the famous altarpiece from Vyssi Brod in southern Bohemia. After many years the remnants are exhibited together because this collection is usually divided between Prague and Budapest. Our Polish colleagues have lent us a number of interesting art objects. These include Pieta sculptures of the Virgin Mary mourning for Christ. We can also see some 14th century sculptures of Madonnas seated on a Lion - a specifically Silesian iconographical topic. The dominant piece of the Gothic part of the exhibition is a monumental stone sculpture group from Olomouc showing Christ on the Mount of Olives - the Agony and the Garden."

The second part of the exhibition features "the Glamour of Rudolfine Prague" and the relation between artists in Prague and in Poland's Wroclaw. Art in Silesia was strongly influenced by the works of Mannerist artists around the Prague court of Rudolf II. One such example is:

"A sculpture by the most famous Rudolfinian artist Adriaen de Vries, a man from the Netherlands, who was a pupil of the famous Giambologna in Florence at the court of Medici. The sculpture of Christ is on loan from the National Museum in Warsaw and originally stood at a tombstone in a village near Wroclaw, in Silesia."

One of my personal favourites is a painting exhibited in the third section looking at "The Baroque Flamboyance of Monasteries and Palaces". The painting depicts men in boats pulling the body of Saint John of Nepomuk out of the Vltava River. Legend has it that King Wenceslas IV had the patron saint of Bohemia thrown off the bridge because he refused to share a secret told to him by the king's wife. But, as we hear from curator Vit Vlnas, the painting is also a very helpful and unusual illustration:

Join Dita Asiedu as she tours the exhibition with curator Vit Vlnas in this week's Arts. 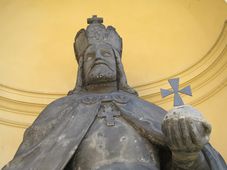 Charles IV - the father of the Czech nation

Hello and welcome to a special programme celebrating the 700th anniversary of the birth of Charles IV, Holy Roman Emperor and King…

Karel IV was born on May 16, 1316, in Prague, the eldest son of King Jan of Luxembourg and Eliška. His parents represented the unification… 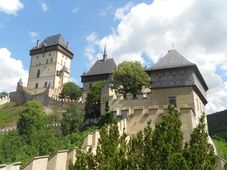 With the arrival of spring the country’s many castles and chateaux open to visitors, offering exhibitions, concerts and theatre performances…