A new drama-documentary premiered in Prague on Thursday evening about the incredible story of Nicholas Winton. Called ‘Nicky’s Family’, the film retells the story of the British man who saved hundreds of Jewish children from Nazi-occupied Czechoslovakia in 1939. Winton was later knighted for his efforts, and Sir Nicholas, now 101, was in Prague once again to attend the premiere. 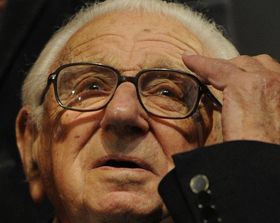 Nicholas Winton, photo: CTK In 1939, in the final months before the outbreak of war, a mild-mannered, bespectacled British stockbroker named Nicholas Winton found himself, by chance, in Prague, there to visit a friend. He was touched by the condition of thousands of refugees – mostly Jews and political opponents of Hitler - from Germany and the Sudetenland, crowded into squalid camps. He was especially shocked that no-one was doing anything to save the Jewish children from the terrible fate he was sure the Nazis had in store for them. So he decided to get them out.

That’s Lady Milena Grenfell-Baines, nine years old when she was put on a train by her parents, bound for a new life in England. The train was one of eight transports organised by Nicholas Winton in the months that followed his visit to Prague, travelling across Nazi Germany to the Hook of Holland and then by steamer ship to England. I was speaking to Milena at the premiere of Nicky’s Family, the latest of three films to be made about by the story by the Slovak director Matej Mináč. Milena’s sister, Eva Paddock, was also there. 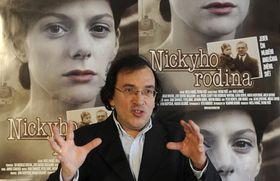 Matej Mináč, photo: CTK “We had been chosen to be fostered by a wonderful couple in Lancashire, called Mr and Mrs Radcliffe, whom we then always called Mummy and Daddy Radcliffe. Daddy Radcliffe came and we went up to Ashton under Lyme with them. We were very fortunate in that eventually both our parents did escape and we were reunited with them. But we were raised in Lancashire. And that’s where I grew up.”

The story – first told in the feature film All My Loved Ones and then the award-winning documentary The Power of Good – is all the more extraordinary because for fifty years it remained untold. Nicholas Winton, now Sir Nicholas, told no-one – not even his own wife – about what he’d done. It was only uncovered in the late 1980s, and Nicholas Winton, now 101, is feted as a hero everywhere he goes.

Over coffee and cake after that rock star reception at the Prague Congress Centre, the sprightly and still outspoken centenarian told me he was becoming rather weary of constantly being asked to relive the past.

“All this business of regurgitating the past – which is what I’m usually asked to speak about – to me is absolutely useless. I mean it’s not the past that’s important. We’ve never learnt from the past.”

Sir Nicholas is probably doomed to live the rest of his years retelling his story – it’s simply too powerful to ignore, even when you’ve heard it time and time again. Those involved in the drama-documentary were clearly touched by it. Actress Klára Issová plays the mother of one of the children. 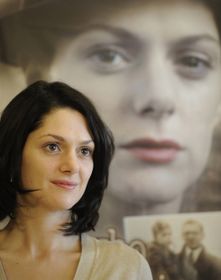 Klára Issová, photo: CTK “I’m not a mother, and for me to imagine this horrible pain when you must send your own children somewhere and you don’t know what will happen, and during the war, it must be very stressful. So it was difficult to play the role, and especially working with children, it’s very difficult. You must really concentrate and take care of them somehow, to try and work with them to make them act.”

And parts of this story remain untold, even after this latest screen treatment. Only around 250 Winton Children have ever been identified – some 400 children started new lives in England and beyond, and no-one – not even the man who saved them – has any idea where they are today. 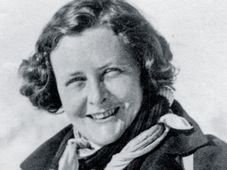