One of the most compelling Czech documentaries of the year gets a cinema release on Thursday. Show! follows manufactured teen pop group 5Angels as they are drilled for fame by the super ambitious father of one of the young girls. Musicians who have remained popular since the communist era also appear in a film that lifts the lid on the Czech entertainment industry and raises questions about exploitation. 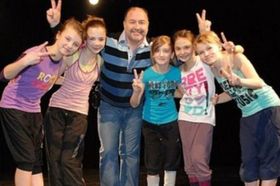 'Show!' (5Angels and Michal David) I discussed Show! with its young director Bohdan Bláhovec, and began by asking:

Couldn’t this story have happened anywhere?

“There is still the influence of the musical environment connected to musicians in their 50s who have for a very long time been successful producers.

“Their, how to say it, their connections go through the whole of society, maybe a little bit of politics, etcetera.”

Was there anything that you learned during the making of this film that really surprised you?

“The biggest surprise was that it’s very hard to judge it. It seems to be very easy to judge it. OK, I don’t like this tune, it sounds stupid, it’s very cheap. 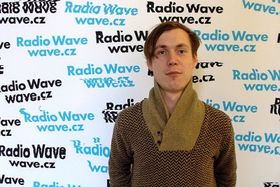 Bohdan Bláhovec, photo: Martin Melichar “But when you get deeper into it, the thing starts to be much more ambivalent and much more complicated.

“They just have different values. And I realised that for me it’s not easy to judge their values.”

The manager of the group, Michal Mertl, who is the father of one of the girls and I guess could be called the real protagonist of the film, evidently welcomed your involvement, your interest, at the beginning. But how has he reacted to how he and the group have been portrayed in the film?

“I think he has a bit of a problem with himself in the film. When he first saw it he said, in it I look like an idiot and a dictator.

“That wasn’t my plan. It was just the material showed him in situations that were controversial. So I think right now he’s kind of unhappy. It’s a different point of view than he is ready to see.

“From the point of view of the PR level, he considers this film to be a problem, because it changes the fake face which they are working with. And I can understand this. 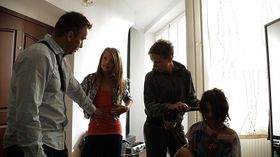 'Show!' “But there is an important thing: It’s a character-based film, but it’s about the topic. Worldwide there are millions of guys like Michal Mertl. There are billions of girls with parents who try to make them successful.

“So I didn’t want to say, let’s judge this guy, he’s crazy. I wanted to say, we are living in a world where this is possible. And where people to do this because it’s normal. It’s like a normal situation, worldwide, if you know what I mean.” 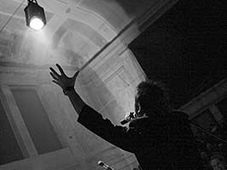 Welcome to Czech Books - and to Czech slam! Slam poetry first came into being in the United States in the 1980s and is basically a…