"The Good Soldier Svejk and His Fortunes in the World War" is the episodic tale of a Czech soldier in the Austro-Hungarian Army whose own apparent stupidity is used to critique the absurdities of war. Translated into 60 languages, it is perhaps the best known Czech work of fiction of all time. Now, over 80 years after its publication, its author Jaroslav Hasek and illustrator Josef Lada have been reunited in a new collection. 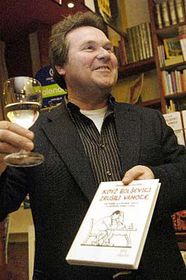 Richard Hasek, photo: CTK "Kdyz bolsevici zrusili Vanoce" ("When the Bolsheviks Abolished Christmas") is the name of a freshly published collection of short stories and poems by the great Jaroslav Hasek. The author was a colourful character whose own life reflected the turbulent times in which he lived, and at one point he was a member of the Russian Communist Party. His grandson, Richard Hasek:

"Hasek always adapted to the times. He had an anarchist phase, he was a Bohemian. He also went through a Bolshevik phase but when he began to really understand the Bolsheviks he had to protest against their injustice, their stupidity! He wrote the title story on December 24th 1917."

Gracing the cover of the new collection is a drawing immediately identifiable as the work of Josef Lada, who also illustrated the Good Soldier Svejk. But in the Czech Republic Lada is known for far more than Svejk - he is much loved to this day for his Christmas paintings and a cartoon cat called Mikes. Here's his grandson, also Josef Lada. Richard Hasek and Josef Lada, photo: CTK "His pictures really capture all kinds of people, animals, children like them...there are Christmas and Easter themes. That's why I think people still like Lada's work so long after his death, which I'm very happy about."

Given that "When the Bolsheviks Abolished Christmas" was put together just this year, Lada's illustrations were obviously not created to fit Hasek's stories. But they will be new to many Czech readers.

"Of course they were all published in Lada's lifetime, but mostly in magazines. So most of them haven't appeared in a book before. That's why I think it's a good thing that they are now available to the public through this collection, because people obviously can't be familiar with old editions of newspapers or magazines."

Jaroslav Hasek died at the age of 40 but is said to have written an incredible 1,500 short stories. His grandson Richard says it hasn't always been easy to establish his authorship of some of them.

"He used 120 verified pseudonyms, which has made life difficult for literary historians! He used so many names because he was so prolific - he could write several fully realised stories a day, but they couldn't publish three stories under his name in the one newspaper! He didn't want people to get sick of seeing the name Jaroslav Hasek all the time."

And Richard Hasek - who now runs the pub where his famous grandfather wrote parts of Svejk - says more of his unknown work is sure to be published in the future. 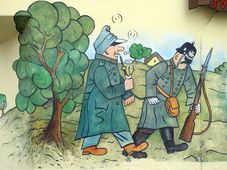