Only a few years ago, this would have been unthinkable, a NATO summit in the heart of the Warsaw Pact, two hundred miles behind the Iron Curtain. Now, with the Warsaw Pact consigned to history, the Czech Republic, Poland and Hungary are firmly rooted in NATO, and as the Alliance's Secretary General George Robertson told us, the Prague summit will see a commitment to still further expansion:

With numerous political and strategic issues at stake, the scale of the next wave of expansion remains a matter for speculation. Mr Robertson himself is extremely cautious.

"Nine countries have applied. They're all equal and they're all being assessed at that moment under the Membership Action Plan that was launched at the Washington Summit, so I'm not going to be drawn on how many or how few might fall into the category of getting invitations and when these invitations might apply. That's dangerous territory, and there's an old political expression that I always remember - that when you're walking on eggs, don't jump."

The strategic importance that the Czech government attaches to next year's summit is reflected in its choice of one of the country's top diplomats, the current Ambassador to Washington, Alexandr Vondra, to take on the job of special commissioner to organize the event. His credentials as a former dissident are impeccable, and he earned a reputation as an accomplished negotiator during delicate talks with Germany in the 90s.

But there is still plenty that could go wrong. The Czech press recently speculated that Prague as the summit's venue could even be under threat, due to differences with Washington over US sanctions against Cuba. Also NATO has recently been openly critical of the Czech Republic because of the snail's pace modernization of the country's armed forces.

On the other hand, the Czech Republic's neighbours to the east see the summit's venue as a potential boost to their own ambitions to join the Alliance. The Czech Republic has already promised to lobby hard for its former federal partner, Slovakia, to be invited to join at the Prague summit. It has also been working to win respect among its NATO partners, by trying to smooth relations with Russia.

As the summit draws closer, another fear will loom. Eggs most certainly will be broken if the summit is accompanied by the kind of violence and street clashes that were seen at last year's World Bank meeting. 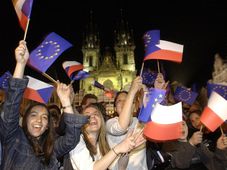 Breaking down the psychological walls

Over the last two years we have listened to sounds from the Czech Radio archives going back over eighty years. In this, the last of…

Breaking down the psychological walls

Over the last two years we have listened to sounds from the Czech Radio archives going back over eighty years. In this, the last of…