One of the Czech Republic's cultural gems has always been the Museum of Central Bohemia. Located in the town of Roztoky, north of Prague, it boasted unique archaeological collections, an important conservation department, numerous historic artefacts, and a number of permanent exhibitions. But, last year the Vltava River burst its banks and flooded much of the museum with very little warning, leaving it devastated. How has the museum fared in the year that's passed? Dita Asiedu paid it a visit and is back with this report: 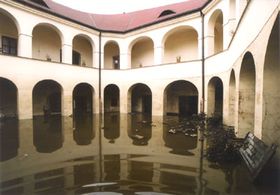 Chateau in Roztoky during floods When driving through the main gates of the Museum of Central Bohemia, one would not believe that the park and historic chateau grounds were covered by several metres of water just twelve months ago. The garden is in full bloom, the exhibitions are worthwhile, and the archaeological collections and artefacts are impressive. But according to the museum's programme director, Tana Pekarkova, much work still lies ahead:

"Everything that worked then, works now. Imagine, though, you had a house with two floors and now have to fit everything into the upper floor - not just the bedrooms but also the toilet, kitchen, living room and garage. Although we're working in makeshift conditions, the public has not noticed it yet. The staff is always aware of it though because we naturally get sick of each other sometimes. We opened our doors to the public on December 5, and have offered six new exhibitions since then, accompanied by various cultural programmes such as theatre performances, concerts and so on. Often, visitors do not remember that this place was flooded a year ago. Some ask us why the walls look so rough and we have to explain to them that it was caused by the water."

And I'm not surprised because the first thing that visitors see is a beautifully kept majestic park with a unique exhibition of healing plants. According to Mrs Pekarkova, it is thanks to the museum's optimistic and tireless staff that reconstruction work has come this far. But she also stresses that this quick recovery would not have been possible without the help from the locals:

"Most of the help came from the local residents. People from the nearby village of Unetice also came here and made a large contribution after holding a benefit performance for us. We also had volunteers from all around the country call in to offer their help. But with hardly any accommodation available, I often had to thank them for their good will and turn them down. As regards the local residents I was pleasantly surprised by the large number of volunteers and work they put into our museum. We had a hair dresser, for example, who did the most demanding jobs alongside fire fighters for two whole days. So these were moments when the locals gave us all they had and showed their true selves." 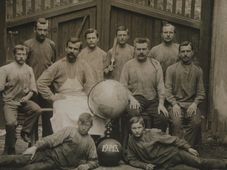