Three Communist MPs in Russia’s Duma have proposed that soldiers who served during the 1968 invasion of Czechoslovakia should be granted war veteran status, in order to gain extra social benefits. The MPs said the aim of “Operation Danube” had been to supress a coup prepared by the Czechoslovak opposition with the support of Western states. I asked historian Jan Adamec how he interpreted the initiative of the Russian MPs: 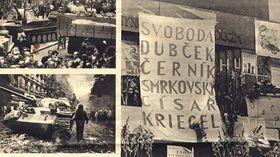 Soviet invasion of Czechoslovakia in 1968, photo: Czech Television “The MPs probably want to use it in their political campaign to bolster national spirit and show that they care about former soldiers, now pensioners who need financial aid. On the other hand, it fits into a broader discussion within the Russian society on re-valuating the legacy of the Soviet Union and its role in the Cold War.

“For us, it is nothing new – for example in 2014, the civic group of veterans from the Soviet war in Afghanistan erected a monument at Prague’s Olšany cemetery. The inscription said in Russian and Czech: ‘To the eternal glory and memory to all fallen soldiers, internationalists and peacemakers. ’

“These can be easily identified in Soviet-era newspeak not only as those who fought in Afghanistan, but also the 98 Soviet soldiers who died during the 1968 intervention in Czechoslovakia.”

So what would you say is the view of the general public in Russia of the 1968 invasion?

“I think the position presented by the three MPs has been a generally shared opinion among the Russians for a long time. This interpretation keeps on echoing the official Soviet propaganda, but it is dressed up in new clothes.

“It says generally that Czechoslovakia wanted to break up with the Soviet sphere and desert to the West. NATO would have established its bases there. It was a threat for the Soviet security and therefore the Soviet Union had to defend itself.” 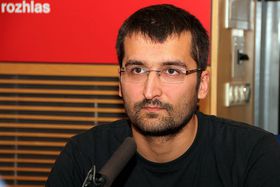 Jan Adamec, photo: Šárka Ševčíková You said that this initiative echoes the general view, but would you say that in recent years there have been attempts to make this approach more official?

“I think it is more about misusing falsified interpretations of history to explain current political and geopolitical situation of Russia for the Russian public. It mainly concerns the NATO expansion eastwards and the line is: look, NATO wanted to capture Czechoslovakia in 1968 and we prevented it, and now it is more or less the same – and we have to take firm position as well.

Has any Russian politician officially apologised for the invasion of Czechoslovakia?

“In the 1990s, Russian President Boris Yelcin said that Russia cannot be held liable for the actions of the Soviet Union but he admitted that it was an aggression against an independent state.

“And similarly, in 2006, President Putin said that Russia had certain moral responsibility, but no legal liability for the invasion in 1968.”

In a statement issued on Wednesday in reaction to the Russia’s new bill on veterans, the Ministry of Foreign Affairs said it regarded the move as an attempt by some to distort historical facts.