The next general election is still a year away but already the right-of-centre, opposition Civic Democrats are gearing up for a changing of the political guard. Speaking last week at a meeting with Czech businessmen the party's leader Miroslav Topolanek promised big changes - in his words a "night of the long knives" in the public sector following eight years of Social Democrat rule. That's tough talk indeed. 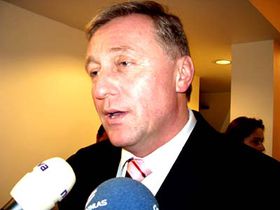 Mirek Topolanek Jan Velinger joins us in the studio.

"Mirek Topolanek is a tough-talking politician. If he has gotten far at all it is precisely by not mincing his words. That has helped him raise his profile ever since taking over as the leader of the Civic Democrats. At that time - two-and-a-half years ago - many predicted that Mr Topolanek would be unable to last long, in the shadow of his predecessor, now President Vaclav Klaus."

On the other hand, in recent weeks it seems that at times Mr Topolanek has overdone it on several occasions, to a point that was not always to his advantage.

"That has been interesting to watch. Sometimes the rhetoric works, sometimes it doesn't. When earlier in the year a prolonged scandal paralysed the Social Democrat-led government Mirek Topolanek gained a lot of political dividends by sticking to an uncompromising stance - and his party's fortunes soared. But, since then he has faced something quite unexpected: a new, incoming prime minister, Jiri Paroubek, who, unlike his predecessor, seems to have real political savvy. Polls suggest his "likeability" as a leader has leapfrogged over Topolanek's own, and that must have made the Civic Democrat leader at least a little nervous. To wrench the spotlight back on his party Mr Topolanek may have felt he needed to step up his language more."

He certainly seems to have done that - threatening the civil service with a "night of the long knives" and recently using the word "shit" to describe the EU constitution.

"Yes, but there is a danger of alienating potential voters. It's a risky strategy, and it's early days to draw conclusions. Support for the Civic Democrats remains high - at roughly 30 percent, and many genuinely expect them to win the next elections. Could Topolanek become a hindrance? It's possible. Another Czech politician, former prime minister Milos Zeman, styled his entire career on a gruff, some would say even vulgar approach, that worked... but only for so long. Some supporters will say the Civic Democrats are being 'honest'; but with elections still a year away others must be worried Mr Topolanek could overplay his hand."

The Civic Democrats and the Mayors and Independents gained 10 and seven seats, respectively, in elections to one-third of seats in…