Czech-born author, journalist and Radio Free Europe broadcaster Milan Schulz died in Munich on Monday at the age of 83. He emigrated in 1969 but the link to his homeland remained firm and for hundreds of thousands of his compatriots behind the Iron Curtain his daily commentaries on RFE were a breath of fresh air in the constrained atmosphere of communist rule. I asked his former colleague broadcaster Petr Brod to share his memories of those days. 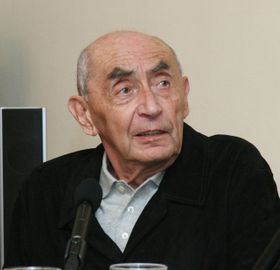 Milan Schulz, photo: CTK “His commentaries were pithy, if that is the right word, they were very spare in terms of propaganda I would say, that is - they did not try to promote Western values in any manner that would overwhelm the listener, he always started from their daily experience and often took issue with individual Czech or Slovak politicians.”

And he could be highly sarcastic when he chose to be so, right?

“He was indeed and I think that his most lasting contribution to both political analyses and humor in Czech society was the way he analyzed and used a secret recording of a speech made by the then- general secretary of the communist party of Czechoslovakia, Milos Jakeš, which was delivered to party members in the summer of 1989, which was already, let’s say, in the closing days of the communist regime. In his speech, Jakeš, then the country’s number one, complained bitterly about how he felt isolated because nobody within the party felt the need to strengthen his position and to fight for socialism in the way he thought was right. So it was a very melancholic speech one could say in many ways and also in its own way a very comic one. The recording of this speech was smuggled to the West and eventually reached our editorial office and there Milan Schulz –in a famous broadcast – dissected it and analyzed it and answered some of the complaints of the secretary general directly in a way that made the whole of Czechoslovakia roar at the time.”

Can you remember how he experienced the fall of communism?

“Well, like all of us, he was in a way surprised but also relieved because we were watching the downfall of various communist regimes from Munich and we saw the regime fall in Poland and then Hungary and we kept asking ourselves when will Czechoslovakia follow. We couldn’t believe that the surrounding countries were becoming democratic and Czechoslovakia was still stuck – in the autumn of 1989 – in its post-Stalinist regime. And then, when the change came with the demonstration of students on November 17, 1989 we were both surprised that the change came relatively fast and at the same time relieved that now Czechoslovakia was marching with the other countries of Eastern Europe towards democracy at the same speed, so to speak.” A look back at six decades of VOA broadcasting in Czech 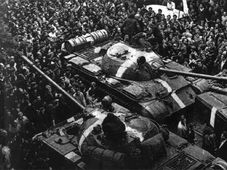 In the turbulent year of 1968, Radio Prague was "freer" than Radio Free Europe

In the early years of Radio Free Europe, the U.S. station – although initially founded and largely secretly funded by the CIA – played…