Mezipatra celebrates pride with “Identity in the City” series

Queer film festival Mezipatra returns in November, but already this week, the organization is hosting "Identity in the City," an English-language film series running parallel to Prague Pride. We spoke with Mezipatra director Pavel Bicek to learn about the weeklong event, and why his organization has endured in the Czech Republic for nearly two decades. 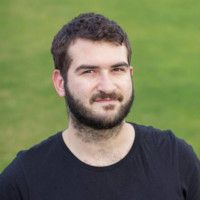 Pavel Bicek, photo: archive of Pavel Bicek The annual Mezipatra festival presents around a hundred films focused on LGBTQ issues. But organizers have selected just four to show at Kasárna Karlín this week, in conjunction with Pride. In the gallery space above Patra cafe, the organization’s community headquarters, Bicek explained how they selected the roster of films.

“It's summer, it's hot, and people cannot necessarily cope with some harder or some art films and so on. So the programming is rather focused on different kinds of families, on lighter stories, on stories of love, and on the kind of films which the viewers can enjoy in summer in the Prague Pride week.”

Each film in the series is accompanied by a discussion, and on the final night of the program, the conversation highlights the experience of queer foreigners in Prague. I asked Bicek about the decision to put the spotlight on expats.

“We think that the view of foreigners on queer life in Prague can be very different than ours, and it can be a certain look into the mirror, and a critical view on how we live here and how the gay life actually is in Prague. For example, holding hands in public is not really common here, and the life is just different. So we are interested in how queer expats look at life in Prague.” 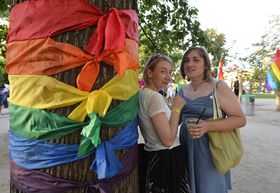 Prague Pride 2018, photo: ČTK/Michaela Říhová “The LGBT life is changing a lot, I think. And of course, it is very much connected to how much visible we are, how much visible queer people are. So last year at the festival, the theme was "Be Your Own Champion." Because when we were growing up, we didn't have any queer role models around us. We were alone, basically, because there were no gay people on television, there were no gay politicians, there were no gay singers—of course there were, but they weren't out. We are trying to be visible, we are trying to be our own champions, and we want to be the role models for the generations after us.

“I think we are educating the viewers. And we are so happy, because the viewers that come to Mezipatra are very open-minded already, and I think we can do really good programming and daring programming, because our viewers can take it.”