It was always going to be a tough battle for Czech squad Viktoria Plzeň in Champions League action on Tuesday and despite the team’s best efforts, especially in the first 20 minutes, things went south pretty fast. Barcelona star Lionel Messi earned a hat-trick on the evening and 4:0 was the final result at Prague’s Eden Stadium. 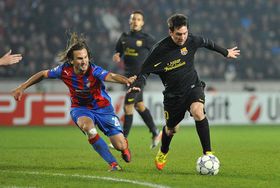 Petr Jiráček, Lionel Messi, photo: CTK FC Barcelona are one of the most entertaining teams in football to watch but one of the hardest to play against - and both proved true in Prague on Tuesday in their match-up against Viktoria Plzeň. The Czech club, playing in its first Champions League group stage, hasn’t played badly, but faced some very tough opponents in Barcelona and AC Milan. As a result the team has only one point from four outings – tying against Bate Borisov.

Tuesday’s result against Barcelona was more lopsided than their first outing, at the Nou Camp, but Barcelona and the Spanish press had praise for the Czech side: one daily noted that while last time Plzeň players fought like lambs, this time they fought “like Conan the Barbarian”. 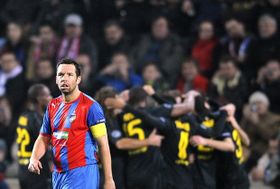 Pavel Horváth, photo: CTK And it’s true there were glimmers of hope.

In the 16th minute Milan Petržela went up against Valdes but shot straight at the goalkeeper. It was the first time in both games – 106 minutes – that Plzeň had fired on goal, but Petržela wasn’t able to do enough with it. Afterwards, here’s what the player had to say:

“I guess you could call it a once-in-a-lifetime opportunity. What keeps going through my head is whether I should have tried to zigzag past him instead. But that’s probably what he expected. He stayed on his feet, refusing to go down. He was ready.”

The most important moment in the match – which ultimately sank the Czech club – came still in the first half when Čišovský was dismissed on a strict call for a foul against Messi in the goal area, leaving Plzeň at just 10 men. Lionel Messi converted the penalty – his 200th goal for the Catalan club, and the first goal of his hat-trick on the night. Čišovský – called now on two penalties in the Champions League – afterwards regretted the mistake: 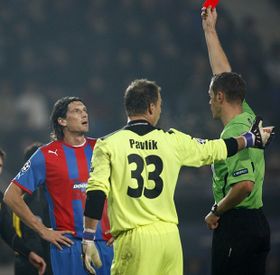 Despite the loss and the fact that Plzeň are at the bottom of their group, they have received praise for fighting hard in their maiden group stage appearance. Barcelona’s coach and others credited the Czech squad with making Barcelona work for the wins and while beaten, the club can still be proud to have kept pace, at points at least, with the world’s best team.

Czechs off to positive start at ice hockey worlds with wins over Sweden and Norway – next up are the Russians; and Slavia Prague overcome…