Masks, marionettes and lots and lots of meat: Masopust 2005

Wednesday marks the beginning of Lent, the period in which Christians prepare for Easter. Here in the Czech Republic many people are observing "masopust", which literally translates as "meat fast". But it isn't only about abstinence - it's also a chance to celebrate. To get a feel for the spirit of masopust, Rosie Johnston has been out and about in the Prague district of Zizkov. 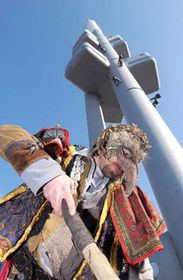 Photo: CTK"Masopust, young people don't know what really happened. My opinion is that we have not eaten meat because it has been winter. People have been sitting at home and thinking about food, but the pig has been too small to eat. The pig is waiting for masopust, we kill him and we live. We eat him and get energy."

One of the performers at Saturday's 'masopust' celebrations there, outlining what 'masopust' actually is. The term 'masopust' has the same etymological meaning as 'carnival', and is the five days leading up to shrove Tuesday, or 'mardi gras' each year. In Czech tradition masks are worn, balls are held, and lots and lots of meat is eaten during this five day period. Events take place in every Czech village. Here in Prague, Ales Nejedla is organizing the festivities:

"Masopust was something that our grandmothers and grandfathers celebrated, of course today it is entirely different and modernized and can't be compared. But I'm pleased that we have brought these traditions with us into modern times." 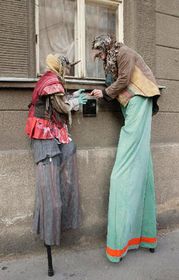 Photo: CTK Celebration of Masopust was not encouraged during the Communist era, but for the last twelve years municipal festivities have been organized in Prague. This year, concerts have taken place starring 'The Plastic people of the Universe' and 'Laura and jeji Tygri'. On Tuesday, the closing parade snaked its way through Zizkov, Prague's third district. Participants included men twirling on stilts, pensioners in sombreros and children in home-made masks. One describes her creation:

"I'm here with my class and my mask is sugar, a sugar holder and I have another mask with me for later which is a fork knife and spoon."

Over the years, masopust has changed into an international event, attracting foreign interest and a versatile set of performers. But do people still remember what they are actually celebrating? And are the traditions of masopust being lost?

"From what I know it's about not eating but I'm not sure. I eat meat all year round so, I really don't know."

"Masopust means beer and meat and a good mood, good music and a good atmosphere and actually everything that is good for people" 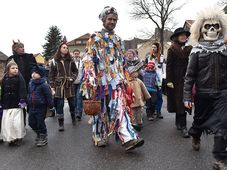