Masaryk returning to Kostelec, hat not in hand

To mark the 100th anniversary of the founding of Czechoslovakia, the town of Kostelec nad Orlicí took up a public collection to erect a new statue of the country’s founder and first president, Tomáš Garrique Masaryk. But it won’t be a faithful replica of the original – removed by the Nazis and later melted down by the Communists. 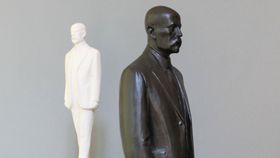 Tomáš Garrique Masaryk sculpture model, photo: archive of Kostelec nad Orlicí municipality The son of a coachman and a cook, the self-made man who would become the father of the nation had a profound respect for education. No doubt Masaryk’s likeness, in the form of a two-metre bronze statue sitting atop a pedestal of even greater height had inspired at least a generation of grammar school students in Kostelec nad Orlicí to take their studies seriously.

But, as was the fate of many statues of Tomáš Garrique Masaryk in town squares throughout Czechoslovakia, subsequent totalitarian regimes looked to install new heroes, and the monument, unveiled with great fanfare in 1935, was torn down by the Nazi less than a decade later, then hidden by locals to prevent its destruction. Kostelec nad Orlicí deputy mayor Tomáš Kytlík: Karel Bartáček, photo: archive of Kostelec nad Orlicí municipality “The statue was reinstated after 1945 but, unfortunately, only very briefly. Five years after the ‘Victorious February’ communist coup, it was again removed. And in 1953, sadly, the statue was pressed flat at a local nationalised factory. And the scraps, or raw material, were taken away to be melted down in nearby Borohrádek.” Historical photography of Tomáš Garrique Masaryk statue in Kostelec nad Orlicí, photo: archive of Kostelec nad Orlicí municipality Locals tried several times to have their monument restored – during the Prague Spring reform movement of 1968 and a few years after the fall of communism. But the political will – and money – wasn’t found until two years ago, when Kostelec celebrated 700 years since its first mention in a historical record. A public collection raised more than 600,000 crowns to erect a new one, which will be unveiled on October 28 to mark the Czechoslovak centenary. Tomáš Kytlík again:

“The sculptor Karel Bartáček, from Prague, worked on the sculpture intensively for many months. The statue will be 2.3 metres high – not including the base – so we are talking about a truly ‘monumental’ work. Typically, the president is depicted standing firm and wearing a long coat. Ours will be in a suit, with no hat in hand, taking a symbolic step forward – which is not such a traditional representation. In the end, we agreed with the artist’s concept. His ‘disposition’ will be a little bit different than the one people in Kostelec knew during the First Republic.”