The World Athletics championships in Berlin were a disappointment for the Czech team, who took only one medal, Barbora Špotáková’s silver in the women’s javelin. Czech fans had been hoping the Olympic champion would bring home the gold, but in the end Špotáková (28) finished behind Germany’s Steffi Nerius. Back home in Prague a week later, how does the Czech athlete feel about having come second in Berlin? 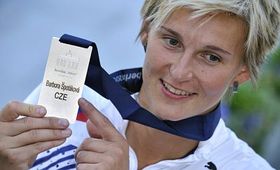 Barbora Špotáková, photo: CTK “I see it differently from the first day. But I’m still satisfied and I’m glad for Steffi Nerius that she won, because she’s ending her career and she couldn’t wish for a better end to her career. I think this is the second best way it could end, because Steffi won and I came second and I beat Maria Abakumova [of Russia].”

How did you celebrate your silver success?

“The first evening I celebrated with a group who came from the Czech Republic. It was a very, very big group, around 60 people – my friends, [boyfriend] Lukáš’s friends, family and everybody. So I celebrated with them and I’m happy that I did it the first evening, because usually when I come back the world championships or from the Olympics I have to go to [hometown] Jablonec to celebrate, then to Prague to celebrate, then to all the different places where people come from. I have like five celebrations and this year I had only one, and I’m happy about that because I am getting older and I cannot handle many celebrations any more!” 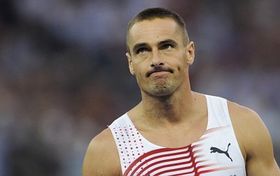 Roman Šebrle took 11th place in decathlon, photo: CTK Overall it wasn’t a very successful world championships for the Czech Republic – what was the atmosphere like among the Czech athletes?

“Yes, exactly, I’m sorry that happened. I didn’t expect such a bad…performance. It seemed to me that we weren’t lucky. We were lacking good luck. The atmosphere was getting worse and worse during the championship, I can say. The Germans were celebrating more and more, and we were getting lower and lower. That’s how it felt to me. I was happy to leave there. Next year it’s going to be better.”

Václav Fišer, who’s now the former head trainer of the Czech athletics team, says that the Czech athletes maybe didn’t concentrate enough, that there were too many family and friends in Berlin – do you think that’s true possibly?

“Maybe, it’s also possible. But for example the Germans were at home, they had many friends there, they were in contact with them all the time. It’s not the reason. I think it’s more that they we are having a bad year. I believe everybody has good luck one year and bad luck the next. I think it was such a pity…nobody felt the way they should feel at the peak of the season.”