The three Lord of the Rings movies are among the most successful films of all time. The brilliantly-made epics have made huge stars of several of the actors involved, none more so than Elijah Wood, who plays the central character Frodo Baggins. The 23-year-old is undoubtedly the biggest celebrity to appear at this year's Karlovy Vary film festival, where sightings of the Lord of the Rings star caused great excitement, and his every move was accompanied by high security. 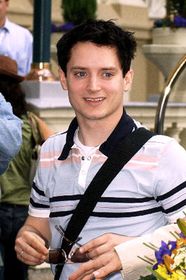 Elijah Wood, photo: CTK Elijah Wood is currently based in Prague where he is making a film. We asked him to tell us more about what he was doing in the Czech capital.

"Well it's my first time in the Czech Republic, my first time in Prague. It's been incredible; it's one of the privileges of being an actor, being able to live in different places to make films.

"I've been there for about five weeks now working on a movie called 'Everything is Illuminated', that Liev Schreiber has adapted and he's directing. It's based on a book that came out about two years ago, by a man named Jonathon Safran Foer. It's incredibly funny but also so touching and dramatic. It's a beautiful, beautiful story and I'm excited to be working on it."

In the film, Elijah Wood plays a young Jewish American who goes to Ukraine to find the woman who saved his grandfather during World War II. The countryside near Prague stands in for Ukraine in some parts of the movie, and for added authenticity the main character drives that icon of the East, a Trabant car. While few in the region remember the East German car with much nostalgia, Elijah Wood said he had grown fond of his 'Trabbie'.

"Let me tell you we've been spending a lot of time in that car. I don't know if it's reliable enough to drive back home. It's good. I do have a fondness for that car, we do spend a lot of time in it.

"It's funny, when Liev showed us the car for the first time he showed us with a bit of trepidation - 'look this is where you're going to be spending a lot of time in the movie, how unfortunate for you'. And I actually really love the car, it's a bit of a jalopy but it's got character."

With his trademark huge blue eyes, Elijah Wood is as striking looking in real life as he is in the Lord of the Rings. But the fact that he is so recognisable hasn't prevented him from getting out and about in the Czech capital. Here's what he said when Radio Prague asked him what he was doing in his free time.

"A lot of dinners, a lot of bars. There's a really great bar in Prague, an Irish pub that I've been frequenting. There are a few Irish people in the film so we go in there on Friday nights to wind down after the week of work.

"I've done a bit of sightseeing, walking around the city. It's one of those cities where everywhere you turn it's so unbelievably gorgeous, so I've tried to walk around as much as I can. It's really wonderful, I just feel privileged to be here - it's great."

You can find out more about the Karlovy Vary International Film Festival at www.kviff.com