The Czech Republic and the Principality of Liechtenstein established diplomatic relations on Tuesday, marking an important step forward in a decades-old property dispute. The two countries have had no official ties since World War II, when Czechoslovakia seized land and castles belonging to the aristocratic House of Liechtenstein.

Until Tuesday morning the tiny Alpine principality of Liechtenstein was the last country in Europe that hadn’t recognised the Czech Republic, a situation now rectified by this declaration. The two sides pledged to work together towards signing an agreement on double taxation, and would also set up a joint commission of historians to examine their common past. That past was shattered by postwar Czechoslovakia’s decision to confiscate castles and land from the Liechtenstein family, regarded as Germans who’d collaborated with the Nazis. The country’s Foreign Minister Aurelia Frick spoke of her optimism for the future. 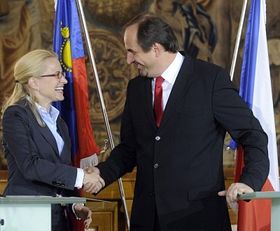 Aurelia Frick and Jan Kohout, photo: CTK “I trust entirely that our relations will quickly take form and concrete content. My optimism in this regard is based on the fact that today’s signatures follow on from a rich and centuries-old common history – a history which gives us many reasons for this cooperation. Today’s signature is a symbol of a new beginning. Today we are not closing a chapter of our joint past – we are opening an important chapter for the future.”

Pressed by journalists, Dr Frick denied that the Liechtenstein family had given up its claim to several castles and large expanses of land in the Czech Republic. Her Czech counterpart, Jan Kohout, clarified that the commission of historians was not going to be given a specific goal, merely to examine the past.

“We still have to discuss the composition of the joint commission. Most certainly the point of this commission will not be to produce some sort of declaration or even for it to have a concrete goal. It’s necessary to shine light on a certain period of our joint history - which, unfortunately, for many reasons which all of us here today know about – has not been given enough attention. The fact that we’ve established diplomatic relations means we can now look calmly at these past questions and that’s what this commission is for – towards mutual understanding between the Principality of Liechtenstein and the Czech Republic.” 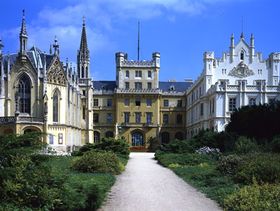 Lednice Castle is one of the Moravian castles that belonged to the Lichtenstein family, photo: www.czechtourism.com The Liechtenstein family have always argued they were neither German nor Nazi collaborators, and have tried to win back their property in the courts; the Czechs have always refused to reopen their past. The implications of restitution are mind-boggling: what’s at stake are not only some of Moravia’s finest castles but also one and a half thousand square kilometres of land; that’s ten times the size of the Principality of Liechtenstein. The Czechs are unlikely to give it back, but the two sides have agreed that the dispute should no longer serve as a barrier to a proper diplomatic relations. 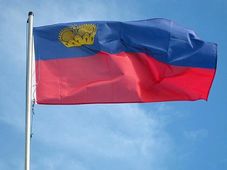 Monday was a surprisingly busy day for Czech diplomats focusing simultaneously on one of the world’s largest countries, Canada, and…

The Czech Republic is celebrating the 700th anniversary of the birth of Charles IV, King of Bohemia and Holy Roman Emperor, whom Czechs…