Possibly the best-known living Czech writer, Milan Kundera, will receive the State Prize for Literature on Thursday for his famous work "The Unbearable Lightness of Being". The novel was first published in French in 1984, but the official Czech edition didn't appear in this country until last year, to great acclaim. However the 78-year-old writer, who emigrated to France in the 1970s, has what can best be described as a difficult relationship with his homeland, and will not attend Thursday's prize-giving ceremony. Rob Cameron spoke to literary critic Michal Prochazka, and asked him whether Czechs still considered Kundera to be a Czech writer. 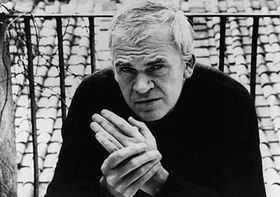 Milan Kundera, photo: CTK/Gallimard "His origins are in the Czech Republic, in Central Europe, so there's no question that we can label him as a Czech, or originally Czech writer, no matter that he moved not only to a different country but also to a different language. I think maybe that the older generation has trouble calling him a Czech writer, although I don't see any hesitation among younger literary critics and younger writers."

He's being given this prize - do you think writers of such stature as Kundera really care about receiving these plaudits from the Ministry of Culture, compared to, say, the Booker Prize and so on?

"Well it's a hard question. We can only speculate since no-one can really ask him. I would say in this particular case there is probably a symbolic value, more important than all the money or whatever is connected to the prize, and that symbolic value is the fact that the state is giving this prize to a writer who has controversial relations especially with the older generation."

"I think we would have to return to the 1960s. Back then, a writer was considered to be a person with such a responsibility for the nation, especially at a time when Czechs were entering twenty years of occupation by the Soviet army and a new wave of a totalitarian communist state. So in that time a writer was considered as someone who should stay at home and defend the country. There's also a sense of difficult relations with any emigrant who left the country, whether he was not a traitor to this little country in Central Europe. So there are feelings like that, you can find them easily, especially within the older generation."

An exhibition now running in Prague puts the spotlight on translated works by the Brno-born writer Milan Kundera. The French citizen,…