Kokorin Castle may be returned to former owners

The Czech Constitutional Court on Wednesday made a ruling that could have significant implications for ownership rights. It concluded that property confiscated by the communist regime could be returned to its former owners even if it was classified as a national cultural monument. 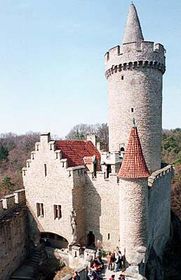 Kokorin Castle, photo: CTK Built on a rock overlooking Kokorin Valley, Kokorin Castle is a majestic Gothic building, the origins of which can be traced back to the 14th century. Its dominant features are a round tower with a cone shaped roof and a large residential block. In the turbulent years of Czech history it was seriously damaged by Hussite troops in the 15th century, and later rebuilt. When the Spacek family acquired it in the early twentieth century it was in ruins. They spent a decade restoring it in the romantic style popular at the time, and adding various new features. But the castle did not remain in the family's ownership for long. After 1948, it was confiscated by the communist regime and later placed on the list of national monuments, a small list that includes some of the country's most important historic buildings.

The Spacek family, who made their fortune in the postal service in the 19th century, and were given a noble title by the Emperor of Austria, have been striving to get their castle back - but they've always run up against an insurmountable hurdle: a law stipulating that national cultural monuments must remain in state ownership. The Constitutional court has now ruled this unconstitutional, on the grounds that it discriminates against owners. Michal Spacil, spokesman for the Constitutional Court, explains that this does not mean that Kokorin Castle or any other cultural monument will automatically be returned to its owners - only that it cannot be ruled out.

The Constitutional court's ruling has caused a stir in Czech society. The country's many castles and chateaux are the Czech Republic's main tourist attraction and Czechs themselves like to tour them in the summer months. Will this mean that many of the country's castles could soon be closed down, sold to private owners or turned into luxury hotels?

The culture ministry has tried to alleviate fears in this respect, pointing out that for one thing, most of the castles which have been returned to their owners have remained open to the public, and secondly, that out of this country's 180 buildings classed as national cultural monuments this would concern only one or two more castles.

Jarmil Spacek and eight other family members who have laid a claim to Kokorin Castle have made it clear that if they do get their property back it will remain open to the public. The chances are that Mr. Spacek may soon call himself "king of the castle". 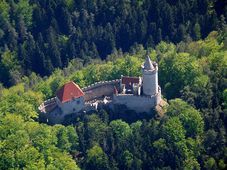 Kokořínsko is a unique protected landscape area (or CHKO in Czech) just north of Prague. The area feels like it has battled with its…