Klaus urges Czechs to take part in EU poll, but refuses to back "yes" vote

President Vaclav Klaus appeared on Czech Radio on Monday afternoon, urging the Czech people to take part in this weekend's EU referendum. But what Mr Klaus, often described as a Euro-sceptic, didn't say, was whether people should vote "Yes" or "No". 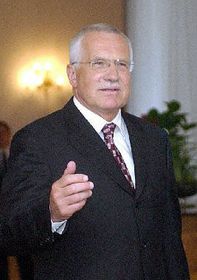 Vaclav Klaus, photo: CTK My colleague Rob Cameron has been listening to Mr Klaus's speech and joins me in the studio now. Rob, I gather there was some doubt as to whether he would make any kind of public statement at all?

That's right. Prime Minister Vladimir Spidla asked Mr Klaus several weeks ago to appear on TV and call on people to vote "Yes" in the referendum. But Mr Klaus responded by saying his signature on the Athens Treaty was in itself sufficient proof that he supported his country's membership. On Friday, the president announced he would issue his own independent statement, but when it came - around 2.30 on Monday afternoon on Czech Radio - there was almost no warning, so it's not clear how many people actually heard it.

Right, so what did he say exactly?

Well it was definitely an unequivocal call for people to take part in the referendum this weekend. President Klaus said it was a "unique moment in history", that the plebiscite was far more important even than parliamentary elections. But of course - unlike the presidents of neighbouring Slovakia and Poland - Mr Klaus didn't say whether people should vote "Yes" or "No". He said he believed people were capable of weighing up the pros and cons themselves.

Why is Mr Klaus refusing to explicitly back EU membership?

To be honest it's hard to work that one out. It was his government after all which first began the accession process in 1996, and EU membership was always a top policy goal of both his government and his party, the Civic Democrats. Recently he's taken a much more anti-EU tone, criticising what he says is creeping federalism, excessive integration etc. So it's not clear exactly where Mr Klaus stands on the EU anymore: his argument that the EU should function as a simple economic union doesn't stand up because the EU was already much more than that when he signed up for it in 1996. But I think we can garner where Klaus stands on EU not from what he does say, but from what he doesn't: and the fact that (a) he won't say whether he himself is going to vote "Yes", and (b) that he's refused to come out and say openly that Czechs themselves should vote "Yes" speaks volumes.