All this year Czechs are remembering the fall of communism in November 1989, but just what was it exactly? Was it the “overthrow” of communism? Or simply “the collapse”? That’s a debate that’s still simmering away in Czech society, and on Saturday the country’s president Václav Klaus once again waded into it, telling students in Prague that the role of individuals in 1989 is often overestimated. 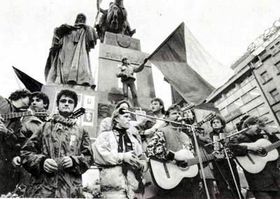 November 1989 in Prague It’s not the first time Václav Klaus has entered the debate on what or who caused the events of 1989. He’s long maintained that the role of individuals – i.e. anti-communist dissidents - has been vastly exaggerated in the history of what happened twenty years ago. Speaking in Prague to around 100 students of the American Institute on Political and Economic Systems, Mr Klaus said he’d long defended the rather unpopular concept that communism was not defeated, but that it collapsed, that it simply evaporated.

The president said communism at the end of the 1980s was weak, old, exhausted and devoid of content, and so it could not exist much longer. Some people, he said, were not happy about such an interpretation because it fundamentally diminished their role in the process. 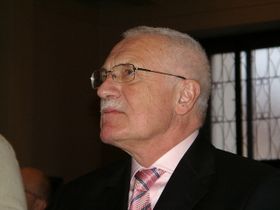 Václav Klaus That could be interpreted as a dig at his predecessor Václav Havel, the playwright and well-known dissident who found himself catapulted to the forefront of the so-called Velvet Revolution. Mr Havel is modest by nature, and downplays his own contribution, although he has been moved to defend attacks on the dissidents and their contribution to those momentous events on several occasions.

When asked by the Times newspaper to speak about his own role in the revolution, he said 1989 was a swell in the tide of history fuelled by communism’s systemic failure, and largely due to one man - Mikhail Gorbachev – even though he was barely aware of the forces he was unleashing, forces that would eventually destroy the Soviet Union and the communist regimes of its satellites.

Václav Klaus’s theory – that communism withered away into nothing, rather than being slowly chipped away by determined individuals – will certainly be discussed again in this anniversary year, as Czechs mark 20 years since the “end” of communism in Central and Eastern Europe.