The Czech President Vaclav Klaus has given an extensive interview to the daily Mlada fronta Dnes, in which he hints at what steps he might take towards the creation of a new government, and also launches his strongest ever attack on the current prime minister Jiri Paroubek. 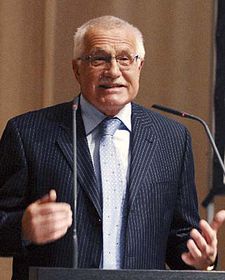 President Vaclav Klaus, photo: CTK Vaclav Klaus was elected president in 2003. Before that he served two terms as prime minister of the Czech Republic, in governments dominated by the right-of-centre Civic Democrats, the party he co-founded in 1991. He led the party for 11 years, stepping down after a poor election showing in 2002. When he became president the following year he vowed to be a non-partisan president. He remains honorary chairman of the Civic Democrats.

The President of the Czech Republic is a largely ceremonial post, but in truth he has a considerable amount of power. Traditionally, the president plays an important role in the aftermath of elections. It is he who invites the leaders of political parties to try and form a government. The Czech Constitution gives him a lot of leeway - there is nothing in the Constitution which says he must ask the leader of the winning party first. So in theory Mr Klaus could ask the leader of any party to begin coalition talks.

However, in the interview with Mlada Fronta Dnes, Mr Klaus gave no indication he would exercise that right. He said it seemed almost certain that the election would be won by either the Social Democrats or the Civic Democrats, and he saw no reason not to invite the leader of whichever one wins. 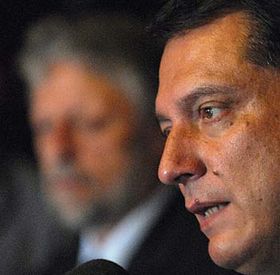 Prime minister Jiri Paroubek, photo: CTK As for who he would like to see forming the next government, Mr Klaus dropped some very heavy hints. He launched a fierce attack against the current prime minister Jiri Paroubek, expressing concern over what he called the "unprecedented" power wielded by the prime minister. He said Mr Paroubek had taken "individual, personal control over the government as well as over his political party", and said this was a warning sign to voters.

Mr Klaus also spoke of his unwillingness to oversee the formation of a minority cabinet, saying he would push for the creation of a majority government. Veteran Klaus-watchers would say that's shorthand for - "I am not going to let Jiri Paroubek form a minority government propped up by the Communists".

If Mr Klaus's party - the Civic Democrats - win the elections, there is a fair chance a majority centre-right coalition could be formed. But if Mr Paroubek and the Social Democrats win, it's unlikely they will be able to form a majority government. So we could well be in for another long, hot summer of complicated wrangling and political horse-trading. Watch this space.