In today's report from the Karlovy Vary Film Festival, Dita Asiedu tells about "Fear and Trembling" - a French film about culture shock in Japan and "The Technical Writer", a film about agrophobia. 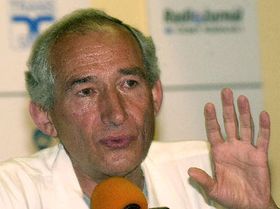 Alain Corneau, photo: CTK One of the festival's highlights comes from France. Fear and Trembling, directed by Alain Corneau, is based on an autobiography by Amelie Nothomb, who tells us about her one-year experience working in a leading Japanese company in Tokyo. For those who are not too familiar with the Japanese culture, the film may be somewhat shocking with its honest description of the differences between western and eastern traditions. Alain Corneau:

"It was my own experiences that motivated me to make this film. I found in those experiences a story of personal initiation, a story of someone who finds his own identity thanks to a certain paradoxical occurrence. As far as Japan is concerned, I like to say that it's a mysterious country in the positive sense of the word - it's an enigma, it's the end of a journey. We Europeans - depending on our culture - have different images of Japan. That image is never the same - Japan is like a mirror, like a wine that changes when you add water. It's a pure contradiction."

Playing the part of Amelie Nothomb is French actress Sylvie Testud, who coincidentally is in two other films presented at the festival; the Austrian-German co-production Dead Man's Memories, which is also in competition, and A Loving Father in which she plays alongside Gerard Depardieu and his son Guillaume. But Fear and Trembling, as Sylvie Testud says, required an effort of a special sort. In the movie, she speaks fluent Japanese:

"I prepared by learning the individual words off by heart. Learning the entire text was really extremely difficult - I had to learn 1,300 sentences. When I sat down with the Japanese professor, he wrote the number "1" next to the first sentence, the number "2" next to the second - one by one he numbered all 1,300 sentences. It wasn't at all easy to remember. I studied six hours a day for practically three months. Alain, the director, gave me as much time as I needed to learn the whole text, and with my memory I needed three months to learn the Japanese off by heart."

Moving on to another film. The Technical Writer, directed by Scott Saunders, tells the story of a man suffering from agoraphobia, the fear of open places. It stars Michael Harris, William Forsythe and Tatum O'Neal, known for her Oscar winning performance in Paper Moon thirty years ago. Scott Saunders explains why he chose to cast Ms O'Neal, who has not had many appearances on screen in the past few years, in the leading female role:

"When we met Tatum she seemed to embody so many of the wide range of traits that her character seemed to possess. She was very poised, very smart, very, very, very strong and Michael Harris is very strong himself. Our problem was that he plays a retiring, reclusive individual and that individual must be dragged forcibly out of his seclusion by the character so we needed an antagonist who could stand up to him. I think in Tatum we found somebody who was strong enough. When they read together before we cast her she was the only person who was not knocked over by Michael - he couldn't overpower her. And I think that was ultimately why we went with her."