The 42nd Karlovy Vary International Film Festival came to a close on Saturday night with a glitzy ceremony at the town's Thermal hotel. The festival's prize the Crystal Globe was presented to a number of directors and actors - and to US star Danny DeVito, who got an award for outstanding contribution to world cinema. Baltasar Kormakur, photo: CTK The Crystal Globe for best film at this year's KVIFF went to the Iceland film Jar City, an unusual winner in that it is in the thriller genre. Icelandic director Baltasar Kormakur, accompanied by his producer wife, thanked the jury for their good taste. On a more serious note, he said four films had been made in Iceland last year and three were shown at this year's Karlovy Vary, which was great.

The award for best director went to Norway's Bard Breien for The Art of Negative Thinking, a dark look at the lives of the physically handicapped. Best actor was Sergej Puskepalis for his role in the Russian film Simple Things, while best actress was Pudor's Elvira Minguez. 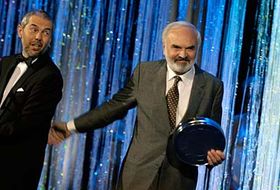 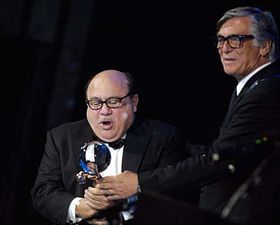 Danny DeVito and Jiri Bartoska, photo: CTK The "documentary longer than 30-minutes" category also went to a Czech film, Ztracena Dovolena (Lost Holiday) by Lucie Kralova. It is about the finding of a suitcase full of photos of Chinese tourists and subsequent efforts to track the people down.

The main star of the closing ceremony was Danny DeVito, who received a Crystal Globe for "outstanding artistic contribution to world cinema". A short film was shown about him, reminding the audience that, as well as being a very successful actor, DeVito has directed a number of films and also produced such movies as Pulp Fiction.