Film buffs at the 38th International Karlovy Vary Film Festival have just one more day to enjoy all that the festival has to offer - great movies and a glimpse of the stars, before the festival ends on Saturday night with an award ceremony for the best films. Dita Asiedu has covered the festival this past week and sends this report:

Director Kim Ki-duk Korea's most famous film director Kim Ki-duk there, telling journalists at the festival he is glad to be in Karlovy Vary, at an event that he says is well known on the Korean film scene for its friendly atmosphere and enthusiastic audience. Last year, the festival held a retrospective of Kim Ki-duk's films. His latest work, the Coast Guard, about a soldier who becomes insane after killing an innocent person while on duty, is in competition this year.

But the star in Karlovy Vary is clearly Morgan Freeman, whose finest work we've seen in films such as Driving Miss Daisy, Shawshank Redemption and Amistad. Mr Freeman will receive the Crystal Globe for Outstanding Contribution to World Cinema at the closing ceremony on Saturday. He also presented the film adaptation of Stephen King's Dreamcatcher, in which he plays a psychotic colonel, who thinks he is Kurtz from Apocalypse Now - a role that critics wonder Morgan Freeman agreed to play:

"In Dreamcatcher the weight of this character was the insanity inherent in the man. He was a guy who fought for twenty five years, has been this guardian of our way of life on Earth and taking it very, very seriously. And over the years that sense has sort of driven out one of the necessary parts of the human condition: that is if you are a warrior killing becomes not so hard to do. So here's a man who's been doing this and the big problem of him doing this is the collateral damage that is inherent in what he was doing -that is the killing of innocent people. So he has got to the point where these innocents don't bother him anymore. And now the man's insane. So to try to get that over somehow is a good acting challenge." 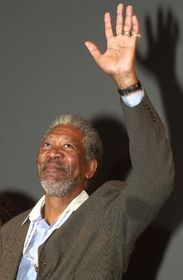 Morgan Freeman, photo: CTK So, while critics say the film itself is not much to write home about, it does present a rare chance to see Morgan Freeman play a villain. A chance one should not miss as his next big role will be that of Nelson Mandela - a role that fits him like a glove:

"It is in development. It wont get scheduled until we have a script which we don't have. The movie is about Nelson. It will not be about the events of apartheid, about the events of history -it will be about him. As soon as we have a schedule for production our agreement is that I will go to South Africa and I will attach myself to Nelson Mandela - I will be practically surgically implanted -and whatever he does I will watch. That will be my preparation because I feel that I am going to have to be him and that's going to take a lot of close watching."

Another respected personality in the world of film who was given a very warm welcome at the festival is director Gus van Sant, who has come to present his latest work, Elephant. Mr Van Sant has had to suffer much criticism after Elephant was awarded with the Golden Palm and Best Director Prize at Cannes this year. The quality of the competition was referred to as the worst in living memory. Gus van Sant:

"You know, as a film maker you have no control over the line up, so maybe that gave us the ability to win the prize, but however many abilities it takes to win a prize like that its always something you know -it could be the judges, it could be whatever - all I know is I got it and I was surprised." 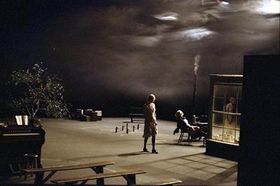 Dogville - Lars von Triers' latest film So, the Cannes distinction may have come as a surprise to many but with a respected filmmaking history boasting films such as Drugstore Cowboy, My Private Idaho, To Die For, and Good Will Hunting, Gus van Sant has nothing to worry about as critics all agree that he is one the best in his field.

One man who certainly thinks so is German actor Udo Kier, who we have seen in eight Lars von Trier movies as well as more commercial films such as Blade and Amageddon. Udo Kier, has come to Karlovy Vary to present Dogville - Lars von Triers' latest film.

"I am very honored to be here. There are so many beautiful actors in Dogville like Lauren Bacall and Nicole Kidman and they are not here. I have only a small role in the film and here I am taking the space of the big actors ....after all I just open the film and I close the film. I think the film is a masterpiece, a masterpiece of a new language and you have actors like Lauren Bacall being extras in a movie -but great extras - because they are wonderful. What can I say - I am very happy to be here."

And that's all this week from the International Karlovy Vary Film Festival, which comes to an end on Saturday. Tune in to Radio Prague on Monday for our final review of the festival, in which you'll find out which film in competition received the Crystal Globe and what Morgan Freeman had to say after being honoured for his outstanding contribution to world cinema.