Join us on Saturday in celebrating our 90th birthday

This weekend we’ll be celebrating 90 years since the first regular radio broadcasts in Czechoslovakia, and we’ll be bringing you a special programme. David Vaughan has been working with a group of Prague journalism students, to discover some of the forgotten gems hidden in the radio archive. He tells us more about Saturday’s special programme. 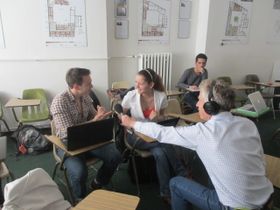 Photo: David Patrone To celebrate our 90th birthday, we put together a project with a group of journalism students at the Anglo-American University here in Prague. The idea came to me because I knew that there were literally hundreds of recordings in the radio archive in English – some of them going back over 80 years – and most have never been analyzed or even heard. Listening to them can be like travelling in time, and they offer some intriguing, sometimes unexpected and often moving insights into the history of this country. We began the project with the students choosing recordings from the radio archive’s digital catalogue, trying to gauge from the very brief catalogue entries – consisting of little more than a name, a catalogue number and sometimes a one-line description – whether or not they would be interesting. Then they listened to the recordings and found out more about them: who is talking, when, why and in what context. 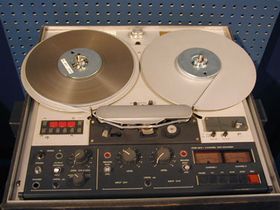 Photo: archive of Radio Prague In Saturday’s programme, we’ll be hearing extracts from some of these recordings, combined with the students’ insights and observations. For example, we'll be hearing Czechoslovakia’s most celebrated pre-war feminist Františka Plamínková, appealing for reason on the eve of World War Two, we’ll have a taste of “Old Gravel Voice”, General Harmon, as he gets ready to pull American forces out of Plzeň in 1945 and the legendary Czechoslovak Radio correspondent Karel Kyncl talks to the first African American to study at the University of Mississippi in 1963. There is also a moving encounter with a six-year-old girl in 1948, back home after being taken from her mother at just four months. We shall hear a friend of Charlotte Masaryk, the American wife of Czechoslovakia’s first president, recalling their friendship, and American students way back in 1937 describe their impressions of Prague.