Czech ice hockey veteran Jaromír Jágr has just landed another NHL season, probably his last, with the Canadian Calgary Flames. And although not so keen on the snow after Florida, the player and team are upbeat about his contribution for the new season. 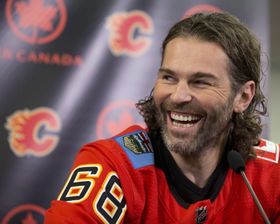 Jaromír Jágr, photo: CTK Wearing his now traditional 68 jersey, a relieved and joking Jaromír Jágr was introduced to the press and fans at his new NHL club, the Calgary Flames.

Although the 45-year-old Czech veteran had been in contact with the club through most of the summer, the final deal appeared to be very much a last minute one on the eve of the new season. After their training camp, Calgary faced the fact that they had issues and needed to bring somebody in.

One major factor in Jágr’s favour was that he was a known quantity for Glen Gulutzan, the head coach of the Flames and formerly with the Dallas Stars, where the Czech played from 2012-2013.

Cast off at the end of the last season by the Florida Panthers, Jágr repeated how grateful he was for Calgary giving him one more year in the league with a 99.9 percent chance that this will really be his last in that league.

"I want to say thanks to the Calgary Flames organisation, they gave me a chance to play at least one more year in the NHL. I have been in the NHL for so many years, I don’t even know for how many years, I started when I was 18 and now I am 45. Obviously, you can see it, I love the NHL. I was waiting for such a long time, obviously this summer was a different one than I am used to. I did not know if I was ever going to play here and that’s why I want to say one more time, thank you Calgary Flames they gave me the opportunity. And I am going to do the maximum to help this team win." 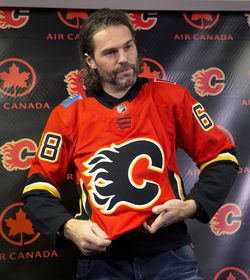 Jaromír Jágr, photo: CTK After five months with no team practice, there were obviously questions about Jágr’s match fitness and how soon he will be able to start. But Flames general manager, Brad Treliving, said that although there are age issues with Jágr now he is still a clear asset when he’s on the ice.

"You get him from the blue line down and he still creates plays. He’s a big body, an elite mind. He said to me ‘Yeah, there’s no question about my foot speed, but some guys just get to the wrong places really fast too…and I get to the right places.’"

Asked about whether he was worried about playing with a relatively young squad, Jágr joked that he is used to playing with young players for a decade or two now because he’s now a lot older than everyone else. And questioned about records he might break in the upcoming season, he said that they were not foremost in his mind, the team came first.