Czechs are marking the 42nd anniversary of the death of student martyr Jan Palach. He set himself on fire and later died in protest against the Soviet led invasion of 1968 and retreat from the reforms, the so-called ‘normalisation’ that followed. The anniversary has relaunched hopes and promises that Prague could finally get a statue to mark the self sacrifice of the 20-year-old student. 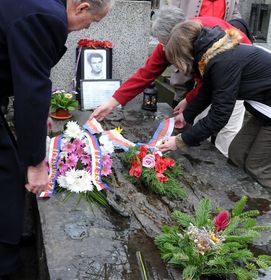 Jan Palach’s grave in Prague, photo: CTK Dozens of Czechs paid tribute over the weekend to Jan Palach, the student who set fire to himself at the top of Prague’s Wenceslas Square on January 16, 1969, in the capital and at his birthplace near the northern town of Mělník.

Palach’s sacrifice and death immediately sparked a massive demonstration against the roll back of the Prague Spring reforms and his memory continued to be a potent rallying point for opponents of the regime over the following 20 years.

But the commemorations have also underlined the fact that four decades on there is still no major monument to the Prague student in the capital apart from the low level memorial at the top of Wenceslas Square. Now Prague city authorities are promising that a sculpture to Jan Palach will be erected. Talks have been proceeding on how to take up a long standing offer from the family of a world famous US sculptor, John Hejduk. 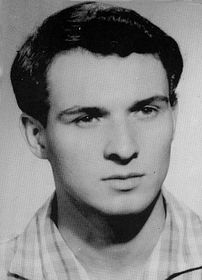 Jan Palach Architectural historian Zdeněk Lukeš explains why he is backing that idea.

“John Hejduk is a famous architect, philosopher and sculptor and died about 10 years ago. And I think it was a nice idea to have a sculpture by him in Prague also. The idea of the memorial was very simple and strong. He was inspired by a poem by the famous New York poet David Schapiro. I think he may not be quite so well known here in Prague as in the US. But why not have a nice sculpture by a world famous architect and sculptor, John Hejduk, here in Prague.”

In fact, Hejduk’s two sculptures already went on show in the capital almost two decades ago in 1992 when models in wood and plywood were shown at Prague castle. Zdeněk Lukeš again. 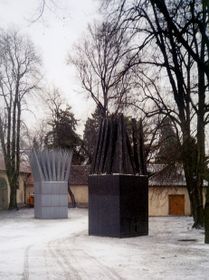 John Hejduk - 'House of the suicide' and 'House of the mother of the suicide', Prague castle, photo: Dystopos, Flickr “They are two very simple monuments like two towers about 10 metres high, one in black and one in dark grey. Both pieces were fortification pieces, or something like this, similar to other works by John Hejduk. One monument was dedicated to Jan Palach and his memory and the second one to his mother.”

The eventual monuments will be cast in iron following the documents of Hejduk’s design. It should be pointed out though that Prague city hall went a long way to promising a Palach statue before, even running a competition to the effect. But those promises did not appear to be cast in iron.