Jan Kavan, president of the UN General Assembly, under investigation

The president of the United Nations General Assembly and Social Democrat parliamentarian Jan Kavan is once again in hot water. Mr Kavan is rejecting calls that he should resign from his UN post because of a scandal involving classified documents at the Czech Foreign Ministry. 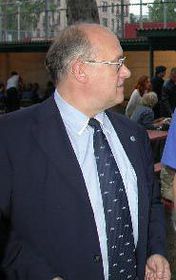 Jan Kavan, photo: CTK The latest controversy involves almost four hundred classified documents which were believed to have been shredded when Mr Kavan was foreign minister - but the documents have now unexpectedly appeared. Jan Klas is the chairman of the Chamber of Deputies' commission monitoring the Czech secret service's counter-intelligence activities:

"We are talking about a majority of documents from the police, intelligence reports, and of course documents from colleagues in a number of government ministries. These documents were found after a thorough search was conducted by the National Security Authority in the archives of the Ministry of Foreign Affairs."

Mr Kavan reportedly signed orders that the classified documents were to be shredded. Two thirds of these documents have reappeared, and what happened to the remaining documents is anyone's guess. Foreign Minister Cyril Svoboda commented on the controversy on Tuesday:

"At the very least it is an indication that a number of documents that should have been filed under a controlled regime were circulated in a parallel regime in our ministry. The documents ended up in the hands of people who should have had them, or perhaps shouldn't have had them... only then were the documents probably checked. In short, what in Czech you call a mess."

Mr. Svoboda added that Mr. Kavan will no longer have access to classified documents and that his post at the foreign ministry will end in September. Prime Minister Vladimir Spidla has asked the National Security Authority to look into Mr Kavan's case. For his part, Mr Kavan has rejected allegations that he made a mistake in the destruction of secret documents when he was foreign minister. He stated that he considered the entire case another attempt to discredit him on the basis of distorted and incomplete information. Here is what he told Czech Radio:

"What Mr Svoboda and member of parliament Mr Klas are saying could damage the name of the Czech Republic. No one here understands what they are saying. This is confusing because it would be the first time that a United Nations member state does not support its own person in the important and prestigious role I am doing."

It is unlikely that Mr Kavan would resign from his post as president of the UN General Assembly, for to do so would definitely tarnish Czech Republic's international image. Czech ambassador to the UN Hynek Kmonicek explains:

"There is no doubt that the consequences of this would be huge. It would be the first time in the history of the United Nations that someone in this position would resign, especially just before his successful term expires. So that's exactly the situation the Czech Republic would face: it would make the headlines worldwide."

Jan Kavan has proven to be a true political warrior. In the past he has weathered numerous accusations and scandals which would have brought down many other prominent public figures. Mr Kavan - who was Czech foreign minister from 1998 to 2002 - was accused of collaborating with the communist Czechoslovak secret service while living in exile in the United Kingdom, but he was acquitted as the court found no evidence to support the claim. Another controversy that Mr Kavan has pulled through relates to his hiring of Karel Srba at the Ministry of Foreign Affairs, who was allegedly involved in a major corruption scandal which cost the Czech state 100 million Czech crowns. Mr Srba was later arrested for allegedly attempting to have the journalist who reported the scandal killed. But Mr Kavan has continually denied any connection between Mr Srba's case and himself.