In the wake of the London bombings, the Czech National Security Council has recommended tough new measures to deal with the potential threat of terrorist attacks, drawn up by Interior Minister Frantisek Bublan. Mr Bublan told reporters if the Czech authorities failed to act, the country could become what he described as a logistics base for terrorist operations. 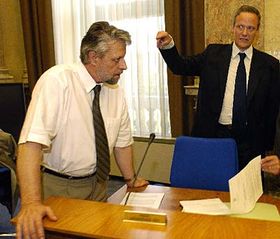 (1) Blocking mobile phone networks - if police believe that Prague, for example, faced an imminent threat of a bomb being detonated by mobile phone, they would have the power to shut down the country's three mobile networks. They would also have access to databases of calls and SMS text messages.

(2) Loosening banking secrecy laws - the police would have easier access to bank accounts if there was suspicion that those accounts were being used to fund terrorist activities.

(3) Bugging phones - Police would have the right to monitor people's phones without the prior approval of the state prosecutor if they suspected those phones were being used to plan a terrorist attack. They would, however, be required to obtain approval afterwards.

(4) Private companies - companies would be required to give police information if it was linked to suspected terrorist activities.

At this stage these measures remain purely recommendations, drawn up by Interior Minister Bublan, discussed by the National Security Council and passed on to the cabinet. The cabinet must then decide whether to approve them, and only after that would they be submitted to parliament. It could be a lengthy process.

If the cabinet approves the measures, however, the likelihood of them being approved in parliament is quite high, because there is a good chance they will be supported by the opposition Civic Democrats, some of whose members have called for security to be increased.

The measures are similar to those currently being considered throughout the European Union.

Prague police have asked the municipality for a green light to activate automatic facial recognition cameras at six locations. That’s…