In his first ever New Year’s address to the nation, Prime Minister Andrej Babiš told Czechs they had reason to celebrate since they were currently experiencing one of the happiest and most successful periods in the country’s modern history and had no reason to fear the future. He said his long-term investment plan had the potential to turn the Czech Republic into a country like Switzerland. 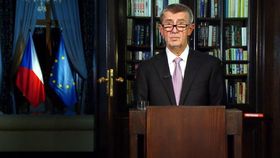 Andrej Babiš, photo: Czech Television In a fifteen minute address to the nation broadcast on national television on January 1, the Czech prime minister left no room for pessimism, telling Czechs they had never had it better.

“Our country is experiencing one of the happiest and most successful periods in its modern history. After 17 years Moody’s has increased this country’s rating to the level of Belgium; in GDP per head we have surpassed Portugal, Greece and Spain. Our economic inequality index is among the lowest in the world; our people are the least threatened by poverty and social exclusion. At 2.1 percent we have the lowest unemployment rate in Europe – and according to a Deloitte survey on the quality of life we have surpassed countries like the US, Singapore and Israel.”

The Czech prime minister took the credit for the reforms undertaken, the state of public finances and the fact that the Czech economy is growing at twice the rate of other EU member states. He said his government would continue its policy of mainly investing in people, which paid off, and that it had long-term plans which would take the country’s successes further.

The key to this, he said, is the government’s long term investment plan which includes 20,000 projects to the tune of eight billion crowns to be implemented in the next 30 years.

“If I were Harry Potter and could wave a magic wand to make these projects come about now this country would immediately be a second Switzerland. My plan is for 11 million people, because I want to see this nation grow. Our future depends on our children.”

The prime minister outlined some of his government’s priorities in the New Year, citing a bill that would speed up construction, the process of digitalization in the public sphere and cyber security which he said was an increasingly pressing issue. 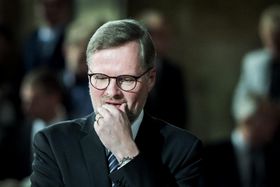 Petr Fiala, photo: Michaela Danelová / Czech Radio As regards the need to address climate change the prime minister said that with nuclear power the country would be able to meet the EU’s goals.

He told Czechs to have faith in the future and not to let predictions of a global economic slow-down undermine their trust in the economy or their plans. “We are looking at a bright future and our country is a country with great potential” the prime minister assured Czechs.

The speech elicited scathing criticism and ridicule from the country’s opposition politicians who advised the prime minister to take off his rose-tinted glasses and even referred to him as “Andrej Potter”. The head of the opposition Civic Democrats Petr Fiala said the speech had reminded him of the “bright future” predictions made by communist presidents who regularly told the people that their life would only get better thanks to the communist party and the communist leadership.