One of the finest pieces of military technology that this country has ever developed is finally being returned to the Czech Republic, after an absence of over sixty years. The LT-35 tank was used by the Nazis during World War II after they invaded Bohemia and Moravia. After the war, the light-weight, heavy-duty vehicle was transported to America, where more of its design secrets were revealed. One of the few remaining examples of the tank could be back on Czech soil by early next month. 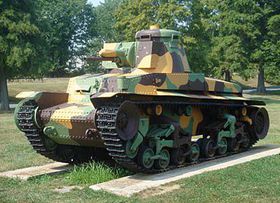 The LT-35 tank, photo: CTK The LT-35 tank was the backbone of the Czechoslovak army throughout the 1930s. Its pioneering design was hijacked by the Nazis after they invaded the country in 1938. The head of the Military History Institute in Prague, Aleš Knížek, is convinced it is one of the finest tanks ever made in this country:

“In its day, it was one of the best tanks in the world. Testament to this is the fact that it wasn’t only used by the Czechoslovak army, but was exported to Romania, Yugoslavia, Bulgaria and indeed all over the world, to most continents except North America.” 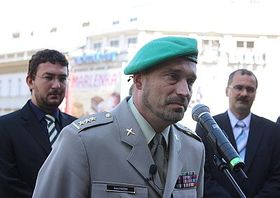 Aleš Knížek But North America is exactly where this one of only four remaining examples of the tank ended up. How? Well, first of all, the tank was commandeered by the Nazis after the invasion of Bohemia and Moravia in 1938. Aleš Knížek tells the rest of the tale:

“It was shipped overseas by the victorious Americans in 1945, where it was taken to their military research and development base. They wanted to improve their own tanks using the LT-35’s technology. And then in the 1950s, the tank was given to a museum where it has been on show ever since. The Czech defence minister raised the issue of the tank around nine months ago, there has been a lot of negotiation since, and all of this led to an agreement which I signed about a month ago.”

The Military History Institute had been in talks previously with Bulgaria, Romania and Serbia, where the other three such tanks can be found, but each time negotiations were unsuccessful. Then, Mr Knížek asked Defence Minister Vlasta Parkanová to ask about the American tank within the framework of US radar-base talks. The tank’s repatriation was settled during Ms Parkanová’s visit to the United States in July. The LT-35 tank, photo: CTK The vehicle is currently making its way over the Atlantic Ocean, it should be transported by lorry from Hamburg to Prague in around ten days’ time. But what is next for the tank? Aleš Knížek again:

“We are hoping to unveil the tank on November 11 – Veterans’ Day – in front of the Military History Institute in Žižkov. We want Minister Parkanová to unveil the tank, as she has played such an important role in its repatriation. It will be exhibited here over the winter, and then next spring it will be taken in for repair, because our vision is to have the tank back up and running in two years time.”

The return of the LT-35 fills an important gap in the Military History Institute’s collection, and the returning vehicle will no doubt be greeted with more than a bit of fanfare.