The Czech Republic has been gripped by ice hockey fever, with the sport's World Championships due to start in Prague and Ostrava on Saturday. On the eve of the competition, the biggest Czech hockey star of all time, Jaromir Jagr, talks about the Czech team's chance of success, the passion Czechs have for the sport and how his club team-mates from North America will enjoy visiting the Czech Republic with their national teams. 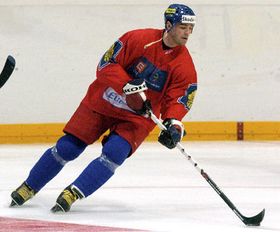 Jaromir Jagr, photo: CTK "We've got a lot of offensive potential and there's a lot of work to be done on our defensive side. And we've still got a few days to work on it, and especially the situation in our defensive zone, five on five and three on three."

The Czech ice hockey coach Slavomir Lener discussing his team's strengths and weaknesses on Thursday, just after announcing which players he had selected for the 25-member squad. This World Championships is special for the players, because they will be playing in front of home crowds in Prague and Ostrava. All of them will be hoping to emulate the country's historic Olympic gold at Nagano in 1998, which led to a wave of euphoria around the country.

On Thursday the Czechs beat Canada 8:5 in their final warm-up game before the Championships; afterwards, the biggest Czech star of all time, Jaromir Jagr, said people in this country were unusually passionate about ice hockey.

Jaromir Jagr said as well as the pressure the Czech Republic will have home advantage, and the Czechs were among the teams who had a chance of winning the competition.

"I think we're one of those teams...eight teams can have a chance: Russia, Finland, the Swedes, Slovakia, us, Canada, the US, maybe Germany, you just never know. 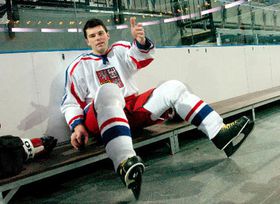 Jaromir Jagr, photo: CTK "It's a tough tournament. You have to understand it's a different system than it used to be. You cannot afford any mistakes - you make one mistake in the game, you go home. That's why it so tough; I don't like the system but that's the way it is.

"But as long as you give a hundred percent, the fans appreciate it. I understand they want to win every time, it's up and down, but that's sport."

Jagr is a legend - and the best paid player - in the NHL, where he has been since he left the Czech club Kladno in 1990 at the age of 18. After the friendly against Canada on Thursday, he said he was sure his team-mates from North America would enjoy playing in the Czech Republic.

"I think a lot of players when they asked them if they wanted to go to the World Championships they said yes right away, because it's in the Czech Republic."