Homelessness was virtually unknown in this country under communism, although it existed in various covert forms. After 1989 big cities, especially the capital Prague, witnessed an influx of people from around the country who found themselves without a job and a permanent address. The cities were totally unprepared, but over the years, a number of institutions started offering short-term and long-term assistance to the homeless. To be able to offer more targeted services, the City of Prague, together with several NGOs, have carried out the first ever homeless census whose results have just come out.

The Prague Main Railway Station is probably the most notorious location in the Czech capital where homeless people spend their days and nights. Empty carriages, deserted houses, garages and parks, those were the most typical places where the censors searched for homeless people in February. Their figures were added to those obtained by volunteers stationed at terminal stations of public transport lines and figures provided from overnight shelters. The result - 3,096 homeless people were counted during one evening; 2,662 of them men and 434 women.

Miroslav Luczka is the head of the Municipal Centre for Social Services in Prague, one of the partners in the project.

"This homeless census is a result of our meeting with the mayor of Prague last year. He prompted us to carry out the census, prepare a report on homelessness in Prague and provide the city authorities with concrete data. So far they could only work with hypothetical numbers. The estimates ranged from 1,000 to 20,000 homeless people in Prague. The figure we produced is not accurate but it should enable the city to make concrete steps in preparation for next winter."

The February census was a joint effort of the City of Prague and several NGOs and charities. Major Neil Davies, a British Salvation Army officer currently serving in Prague, confirms what the census has revealed: the age and social structure of the homeless are changing. 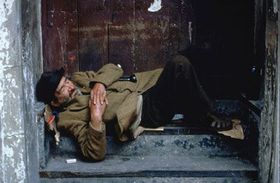 Photo: European Commission "We've recently looked at the age ranges of the homeless, the largest group in our centre. Amongst the men, the largest group used to be for us 41-50 years of age. Now it's 31-40. And for women it's the other way round. We are seeing more older women who are finding it hard to get employment or coming out of prisons to our centre. And for the men, we are seeing a younger age group of men. The men are looking for the short-term accommodation, temporary accommodation but for the women, they are looking for long-term accommodation. So we are seeing the differences in the age ranges and in what the homeless' needs are."

The census also revealed that the number of homeless women is growing in Prague and that even whole families are living on the street. What also worries the organisers is that a significant proportion of homeless people in Prague have a history of mental disease.

The organisers say they would like to carry out regular censuses in the future, preferably on a yearly basis. They also say they would welcome more participation from the authorities. As Salvation Army Major Neil Davies says, in the United Kingdom it is the government that bears responsibility for the homeless censuses.

"The homeless census is part of the National Census that takes place every ten years. So it is the government that actually deal with this although the NGOs often implement streetwork."