With the Czech Republic expecting to become a fully-fledged member of the European Union next May, one of the main topics of discussion among the country's academics has been the fear of a loss of Czech identity. Prague's Academia bookstore has just hosted a discussion forum at which respected historians and social scientists debated the importance and popularity of Czech national symbols today. One of the main speakers was historian and current deputy-prime minister Petr Mares: 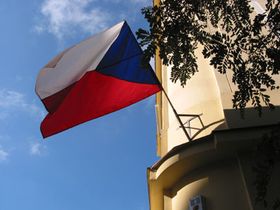 "For me as a politician, probably the most important conclusion is that there is nothing to be afraid of with European Union membership. This is the discussion of the day in the Czech Republic - whether we shall disappear as a people, as a nation, as Czechs."

But for the average Czech, how important are national symbols today?

"We get back to our symbols after important soccer or hockey matches and it's a sort of demonstration of not-so deeply rooted feelings. But there are other important moments, when we get back to older symbols. During our lifetime, it was 1968 and 1989 when we were really in the middle of the change in history and in those moments, we returned not to the official symbols of the republic, in spite of the fact that they were present too - I mean the flag and so on. But we returned much further back into history to symbols such as Saint Wenceslas and this is very interesting because it demonstrates that somewhere deeply rooted in our minds, there is a feeling of being a part of this long, long, history of this nation."

But would you say that the Czech people value their national symbols only at a time of joint happiness or grief? You mentioned a hockey match, for example.

"You know we need some time. It's a very different situation as compared to the one in the United States or the UK, or in other western European countries. Our national symbols were devaluated by forty years of communism. We are still, after thirteen or almost fourteen years of freedom, in a transitional period, looking for a new approach to the symbols. So, I'm afraid that we are still only on the surface and we still need some time to get deeper in our attitudes to these symbols. "

I think we can all agree when we say that today's discussion was very important but is it also being discussed in even more important places such as school, universities, etc.?

"It is. From my own experience I know that students and kids at schools are asking about these things. They are asking what it means to be Czech and that is why I am optimistic about the future of our national pride.