A series of events have been held in Prague and elsewhere in the Czech Republic observing the first anniversary of the death of Václav Havel, who led the country to democracy in 1989’s Velvet Revolution. The commemorations have included the unveiling of a new plaque to the late president at a statue of Woodrow Wilson in the capital. 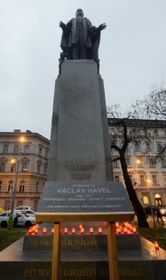 Photo: CTK A plaque in honour of the late Václav Havel unveiled on Monday will, in spring, be installed right beside a statue in front of Prague’s Main Train Station of Woodrow Wilson, the US president who supported Czechoslovak independence. The memorial to Mr. Havel reads “Playwright – Dissident – Patriot – President”, and was the idea of Robert Doubek, founder of the American Friends of the Czech Republic.

“In February 1990, I sat in the US Congress and watched him give a speech, and the entire United States Congress stood up and applauded the president of a country that had been our enemy two months before [laughs]. It was extremely moving. Basically, there couldn’t have been anyone who could have done more than Václav Havel for US Czech relations, because he was so respected by the American people and the American political establishment.”

Former dissident Alexandr Vondra was also in Congress for that historic speech – and approved of the new tribute. 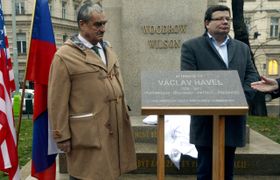 Karel Schwarzenberg, Alexandr Vondra, photo: CTK “I’m very glad that the Americans have decided to commemorate the first anniversary of Havel’s death. He loved the United States. He went to America probably every year in the last two decades. He found a lot of inspiration for his teaching on freedom there. And it’s very positive that the Czech-Americans and the Americans do not forget.”

Also in attendance at Monday afternoon’s unveiling ceremony was former ice skating world champion Ája Vrzáňová-Steindler, a leading figure in Czech circles in the US.

“He did a terrible amount. There was nobody else I could think of who could become president after the changes of 1989. He was the right person. He did so much for the Czech Republic. And America loves him, very, very much.”

What was your own impression of Mr. Havel as a person?

“Very kind. Sort of very shy, a gentleman. But very kind – and he loved the people.”

Czech Foreign Minister Karel Schwarzenberg said he welcomed the new plaque, and all of the events being held to mark the first anniversary of his friend’s passing. 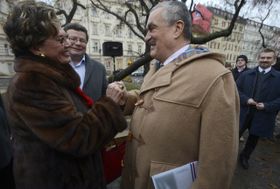 Ája Vrzáňová-Steindler, Karel Schwarzenberg, photo: CTK “If you had the great honour to know Václav Havel, you feel more than anybody else the loss that we had a year ago. And of course we miss him – daily. I’m very touched that people are finally realising even in his own country what a great man he was.”

What do you miss most about him personally?

“His personality…him. Just simply him!”