Just two days to go until Czechs vote on whether to join the European Union, and the government's "Yes" campaign is in its final stages. But there are a number of other groups who've launched their own campaigns - either for or against joining the EU. One of the most prominent pro-EU organisations held a concert in the centre of Prague on Tuesday, to rally support for EU membership. Rob Cameron was there. 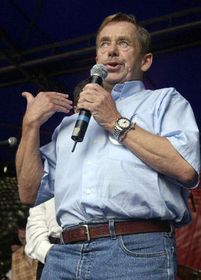 Vaclav Havel, Photo: CTK A band plays at the bottom of Prague's Wenceslas Square, watched by a crowd of around 400 people, many of them wiping sweat from their brows in the 30- degree heat. This group of politicians, musicians and other public figures gathered here to drum up support for EU membership. There was a particularly warm welcome for the former president Vaclav Havel, a staunch supporter of European integration.

"To me it seems all this fuss about losing our sovereignty is misguided. Yes, sovereignty will be lost - by the people who deserve to lose it."

The concert was organised by a non-profit group called Yes for Europe, headed by Monika Pajerova, a former student activist from the 1989 overthrow of Communism. I asked her why the Czech people should vote "Yes" this weekend. 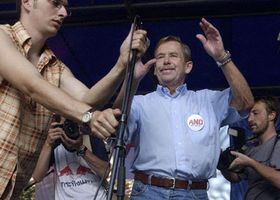 Vaclav Havel, Photo: CTK "I think there are three main reasons for joining. First, the Czech Republic - for the first time in its history maybe - can say a word about its future. And not only about its future, but also about the future of Europe. Second, living standards, the standards of behaving among people, the standards of economic enterprise, education and health are better in Europe than in this part of the world. And third I think we should be around this table, where the future of Europe is decided, and I think Czechs, Poles, Hungarians have a specific point of view on how Europe should be constructed, what the priorities should be. And I think we can more influence it being in rather than being out."

But why the concert, the polls show that 70 percent of people are going to vote anyway, most of them will vote in favour, and there's no minimum turnout. Why do you need to encourage people to vote "Yes"?

"We don't have the 50 percent threshold, as the Poles did for example, but we think that it is very important that the "Yes" is strong. Because if only a few people come, even if 75 percent of those few people say "Yes", it's a very weak "Yes" - we need a strong "Yes". We need to show that this is really the will of the Czech people, and I think it's the biggest occasion since...maybe 17th November 1989."