The winners and runners-up in the prestigious Press Czech Photo 2007 - excellence in Czech photography in categories in everything from current affairs to nature to sport were announced on Wednesday, with the grand prize awarded to Dan Materna of the Czech daily Mlada Fronta Dnes. He won for a picture that shocked many in the Czech Republic earlier this year. 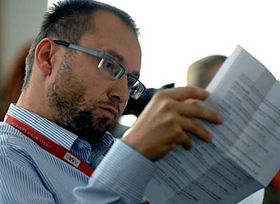 Dan Materna, photo: CTK The photo to win this year's main prize was taken by Dan Materna back in January but it's an image that still resonates after all these months. Eleven members of the international Czech Press Photo jury agreed unanimously it deserved the main prize. The picture, translatable as "Child Custody Battle", captures the tears of a family come apart, showing a physical tug-of-war between a Czech mother, Portuguese father and their six-year-old daughter. The photo was taken in front of a Czech courthouse that awarded custody of the little girl to the father, before the case was later resolved in the mother's favour. I asked jury member Amanda Hopkinson - a British TV director and writer - to describe how she saw the winning image: 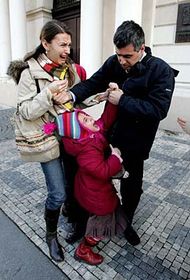 Winning image "Child Custody Battle", photo: CTK "To me, that tug-of-love picture is really the New Europe: a Portuguese father and Czech mother that was a very famous story here which made the national press but us outsiders had never heard of it. We actually thought for a while that the father - who at points in the series seems disconnected - was a court official. I don't know whether he was trying to keep his emotions in check. He doesn't seem to have a relationship with the daughter who clings to the mother. It's absolutely harrowing and although I don't know the circumstances of the break-up it certainly is a narrative for our times. We no longer marry the person from the next village, we marry across different national frontiers and family life hasn't really caught up with that fact." 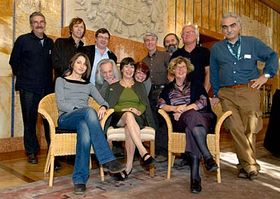 Czech Press Photo jury, photo: CTK Another jury member, US photojournalist Christopher Morris known for his work for Time magazine documenting the presidency of George W. Bush, agrees the photo is nothing if not an emotional one.

"You see this mother losing her child and it's a very tragic photo. The fact that it's not a tsunami or a flood or an earthquake or a war but a conflict between a husband and wife, a court and the little girl in between and that's where I've never really seen a photograph like that."

Christopher Morris was equally enthusiastic about some of the entries recognised in other categories - some of which had jury members at odds - including an unusual series on pet shop animals, or one which captured the sometimes banal, sometimes shrine-like place of TVs in peoples' homes.

"That was a quirky one that was one of my favourites but I think that some of the judges looked at it as horrible photography or very poor photography. But for me, sometimes photography is too slick or too produced or too 'National Geographic' in style. And that is not how we see the world with our eyes. To me the photography of the television sets - that's how we see with our eyes. There's no distortion, no wide-angle, it's very anthropological in the sense the TVs aren't on, you have the toys on the floor... To me it had validity as a social document of how people live." 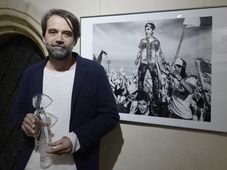 The annual Czech Press Photo competition, which evaluates both professional and amateur journalistic photographs from around the world,… 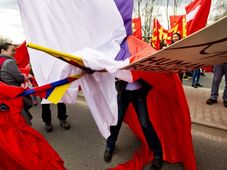 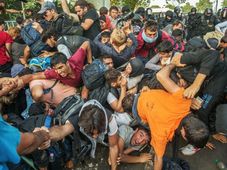 The winners of the annual Czech Press Photo competition were announced on Monday. The main prize was given to Mladá fronta Dnes photographer…