Hardbass – we will bring Heil Hitler to your home

There’s an obscure new trend spreading throughout Central and Eastern Europe - groups of youths from Belgrade to Bratislava to Brno dancing in public to a hardcore Russian techno track, and then posting videos on YouTube. It sounds harmless enough, but the problem is the lyrics have a neo-Nazi subtext. 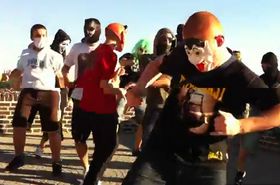 Photo: YouTube This is one of dozens, maybe hundreds of videos posted in recent months on YouTube. To say they’re repetitive is something of an understatement.

They all feature groups of young men dancing in public – some of them, it has to be said, with almost comic clumsiness – to a subgenre of techno called Hardbass, and a particular permutation of it featuring lyrics in Russian. The song features the following phrase. “We will bring Hardbass to your home. 1 4, 8 8.”

What does that mean, I hear you ask. Well, as the internet daily Czech Position first noted, the numbers 1 4 8 8 have a special significance to the far-right: 14 is the number of words in the manifesto of American white separatist David Lane: “We must secure the existence of our people and a future for white children.” The eighth letter of the alphabet is H – 88 means Heil Hitler. Patrik Banga is a Romani or gypsy journalist who frequently covers far-right demonstrations. 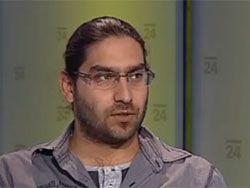 Patrik Banga “The fact that they’re organised neo-Nazis already makes it a threat in my eyes. If someone wants to play techno with racist lyrics in a club, if there are forty of them underground somewhere giving the Hitler salute, well, fine, let them go ahead. But if they’re doing it in public, that’s different. If I get a swastika tattooed on my arm then I should be arrested. So if they’re displaying any racist behaviour in public, they should be arrested too.”

Confusingly, only some of the youths in the videos – posted from Czech cities such as Ostrava, Zlín and most recently Prague - appear to be far-right sympathisers, decked out in Thor Steinar hoodies, balaclavas and ski-masks. Others seem to be football hooligans or just bored teenagers.

There’s been a proliferation of so-called Hardbass attacks – similar to flash mobs - across Central and Eastern Europe in recent months, most notably in Serbia, Slovakia, and the Czech Republic. So should we be worried? Not necessarily, says the country’s foremost expert on far-right extremism, Miroslav Mareš, from Brno’s Masaryk University. 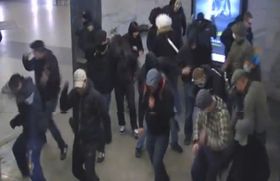 Photo: YouTube Judging from the chatter on far-right websites, there does seem to be some murmuring of disapproval amongst more senior members of the country’s active neo-Nazi movement, who dismiss Hardbass as too closely associated with left-wing and anarchist groups.

So far the spattering of Czech Hardbass attacks seem to have passed off without incident, although a group of youths was ejected from the Prague metro for disturbing fellow passengers. Some citizens – perhaps those with a smattering of Russian – may be more than slightly alarmed to hear boot-stomping youths threatening to bring ‘Heil Hitler’ to their homes.