With the Ice Hockey World Championships beginning in Minsk on Friday, the Czech NGO People in Need has launched a campaign criticising the Lukashenko regime for its less than stellar record on human rights. The NGO is hoping to impress upon viewers that regimes like the one in Belarus use international sporting events as a façade, creating the impression everything at home is hunky dory. 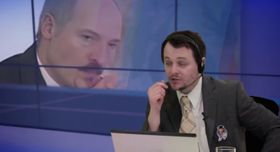 From the video clip by People in Need, photo: archive of People in Need TV “sports announcers” pick apart a match after the first period, describing the match as hard-hitting and even crossing the line. The jargon and the delivery are spot-on: only, in reality, the teams are not teams at all but anti-riot police versus anti-regime protestors in a demonstration in Belarus. According to the commentators, what is on view has little to do with ‘fair play’ and nothing to do with sport as in the background riot police beat a person lying prone on the ground. The ad leaves little doubt as to who the “coach” of the winning team is – the leader referred to in the past as Europe’s last dictator, Alexander Lukashenko.

Jan Žaloudek is the man behind the video clip:

“The idea was to stylise classic sports journalism rhetoric to show the dark side of the regime.”

“The regime of course tries to create a Potemkin village, to paint an overall picture of a contented country.”

Viewers of the ad may be impressed by how far it takes the hockey analogy – the similarity of the presenters in style to real-life sports journalists on Czech Television. Less pleased may be organisers behind the World Championship: the head of the International Ice Hockey Federation Rene Fasel issued a statement saying while everyone was entitled to an opinion it was not up to sports organisations to do politicians’ work, suggesting it was better when politics and sport did not mix. Similarly, the spokesman for the Czech Ice Hockey Association, Zdeněk Zikmund, suggested politics, at least from the association’s perspective, was not the focus, only the competition itself.

“This campaign has no effect on our participation in the tournament. We are going there to play hockey and to get the best possible result.”

Whether the campaign will have a deeper effect is questionable: while some sports fans will no doubt agree with criticism of Belarus’ regime, goals scored and matches won will be just as important if not more so for many others. A similar ad by comparison aired prior to the Sochi Winter Games, but obviously that stopped no one from cheering on deserving athletes. Impressions of that competition only dimmed significantly afterwards: after Russia intervened in Ukraine, amassing of thousands of troops on the border and annexing Crimea. 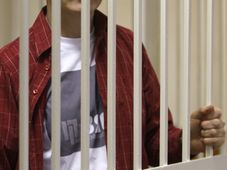 The first ever Václav Havel Human Rights Prize has been awarded to Belarusian political activist Ales Bialiatski. The prize is bestowed… 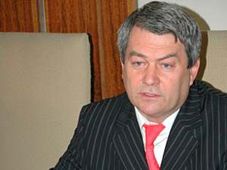 The chairman of the opposition Communist Party, Vojtech Filip, is under fire from his political opponents after meeting senior Belarussian officials… 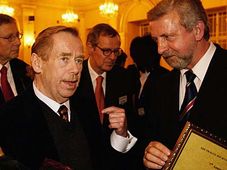 This week, Prague has been playing host to leading Belarusian political dissident Aljaksandr Milinkevic as part of Forum 2000. The…