It’s not been a very good couple of weeks for the Czech Green Party. Ever since the re-election of President Václav Klaus on February 15, the party has been troubled by infighting and a number of very public faux pas. The latest involves name calling, leaked emails and bitter accusations. 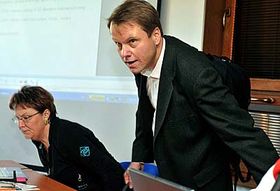 Martin Bursík, photo: CTK The Czech Green Party came almost out of nowhere in 2006’s parliamentary elections, winning six seats in the lower chamber. Under the leadership of Martin Bursík, the party promised to breathe new life and fresh ideas into a decidedly stale political scene. Since January 2007, the Greens have been part of an often uncomfortable government coalition with the Christian and Civic Democrats. Most recently, their relationship with the Civic Democrats came under strain when the party strongly supported Jan Švejnar, the opponent of the Civic Democrat candidate Václav Klaus. Ever since, Green party unity as well as their image of being a cleaner, politer and less vulgar political party has been under strain.

During the recent presidential elections, it turned out that one Green MP would be absent from the final vote, due to apparent health reasons. But it was the manner in which MP Olga Zubová informed her boss of her absence that raised eyebrows – she simply sent him an SMS text message and then refused to pick up the phone. Ms Zubová later defended this alleged unprofessional conduct, stating that she had fainted on her way to Prague. Mr. Bursík let it be known that he was furious. The Czech media has been feasting on stories of Green Party infighting between Ms Zubova’s camp and Mr Bursík’s ever since.

The latest twist in the story concerns a leaked email by Mr. Bursík to fellow Green MP Kateřina Jacques – one he accidentally sent to Ms Zubová instead. Reacting to an email from Ms Zubová explaining her continued health difficulties, he writes “That cow can’t even address us by name. It’s unbelievable. We will push them into cooperation – with force, Katuška. Kisses, Martin.” Mr. Bursík has since apologised for the email, and went on to accuse Ms. Zubová of leaking it to the press.

This email has served to fuel persistent rumours that Mr. Bursík and Ms. Jacques are involved romantically – something they have refused to comment on. But more importantly, it threatens the party’s image as the civilized, polite and refreshing alternative to the often vulgar Czech political scene. That is clearly a very serious problem indeed. Already, the Greens find themselves part of a coalition with a political party whose honorary head, President Klaus, publicly disputes the existence of man-made climate change. The party also remains divided on the issue of the proposed US radar base, and is uneasy about some of the social and economic shock-therapy proposed by the Civic Democrats. So what next? It is difficult to predict – though many analysts have been arguing that the current coalition simply cannot last. Questions about the effectiveness of Mr. Bursík’s leadership of his party may or may not pass, but either way, the squeaky clean image of the Greens is clearly under threat. 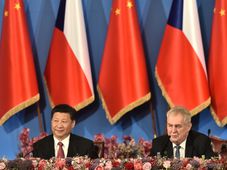