A search is on for one of the world‘s most venomous snakes, the green mamba, which escaped from its owner in Prague’s Hlubočepy district on Tuesday night. Prior to its disappearance the snake bit its presumed owner, a thirty-year-old-woman who remains in hospital in an induced coma. 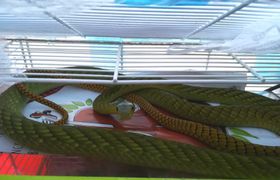 Green mamba, photo: ČTK/PR/Policie ČR The escape of the deadly green mamba hit the headlines early on Wednesday just hours after police and paramedics were called to a house in Prague’s Hlubočepy district where a thirty-year-old woman was found unconscious. The building was quickly evacuated and police called in herpetologists to help them search for the deadly snake which is believed to be hiding somewhere on the premises.

Petr Vorlíček from the State Veterinary Office confirmed that the owner had failed to register the snake.

"The owners or breeders of dangerous species – and poisonous snakes belong in that category – need to register with the State Veterinary Office and file for permission. Before they get it, the authorities send out experts to check up on the conditions in which the animals are kept and whether they do not present a public danger. Although there are 12 mamba breeders in the country, no such permit has been issued for a green mamba in Prague, meaning it was kept illegally."

The thirty-year-old woman who got bitten and who is presumably the owner of the snake, was rushed to hospital and treated with anti-snake venom. Although doctors expected it to take effect by Wednesday night she remains in critical condition. Filip Broz is the spokesman of the General Faculty Hospital in Prague.

“The patient remains in an induced coma, her condition is grave and the next few hours will be decisive.”

Meanwhile, police and herpetologists have been combing the building to no avail. Experts say the snake would be likely to seek safety in a warm hiding place and due to the cold weather out was unlikely to have left the building. However, inhabitants in the vicinity have been warned to exercise extreme caution and report anything suspicious.

A kindergarten close by is keeping the children indoors and parents are keeping a close eye on their children’s whereabouts. People are even worried to let their pets roam free as they wait for fresh news.

Experts say that while the search may be successful, there is also the possibility that the snake could find a hiding place in the vicinity where it could eventually die due to the cold in which case people would never know for certain what happened and whether the danger was over.

The green mamba’s venom consists of both neurotoxins and cardiotoxins, it spreads fast and is often fatal. Unless the patient gets immediate help the poison will damage various organs and the person will eventually die of suffocation resulting from paralysis of the respiratory muscles.

The world-renown Prague Zoo partially opened to visitors on Monday, as part of a gradual easing of measures put in place to contain…

Amid the doom and gloom of the coronavirus epidemic, Prague Zoo has announced a piece of good news: the birth of an elephant calf.…