Alois Grebenicek, a former Communist secret police officer accused of torturing political prisoners in the 1950s, has died in hospital at the age of 81. His passing has closed the file on a highly publicized court case that dragged out for six long years but never really started. 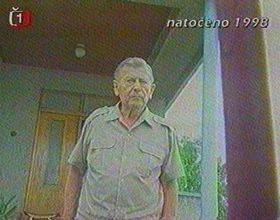 Alois Grebenicek in 1998, photo: CTK Alois Grebenicek, a former investigator of the dreaded communist secret police, was charged in 1997 on the grounds of shocking testimonies by political prisoners. Given the fact that people whom he had allegedly beaten into unconsciousness during interrogations were still alive it seemed almost certain that Mr. Grebenicek would be brought to justice. However in the course of six long years Alois Grebenicek did not make a single appearance in court. Instead, his lawyer produced a series of medical certificates stating that Mr. Grebenicek's ill health prevented him from attending the trial. The endless court case that never really got underway evoked much criticism from both politicians and the press. Many said the case was symptomatic of the country's inability to come to terms with the past. And there were those who pointed out that the judge presiding over the case had a communist past of her own and should not have retained her office after the collapse of communism in 1989. Others yet noted that Mr Grebenicek's son who is the leader of the present day Communist party, must be using his contacts to protect his father. Was the Czech justice system completely powerless -and had it undergone a proper reform after the fall of the communist regime - those where questions which frequently appeared in the press in connection with the Grebenicek case. The Grebenicek case is now closed but it has left many open questions and a number of very disillusioned former political prisoners. They take consolation from the fact that justice will be done elsewhere. Asked to comment one of them said: "Mr. Grebenicek failed to appear in court eleven times, the twelfth command came from a higher authority and that summons could not be ignored. That trial will no doubt be quick and just." Consolation for some - but others are asking - where exactly does that leave the Czech judiciary?