The Czech government’s economic advisory council, known as NERV, has come up with a set of measures to curb wide-spread corruption in public procurement. The council proposes, among other things, to simplify the procurement process and to make it more transparent. Criteria for companies taking part in public tenders should be limited to ensure greater competition. The state should also make sure that all public procurement projects are essentially needed. Radio Prague spoke to economist and NERV member Pavel Kohout, about the proposed changes. 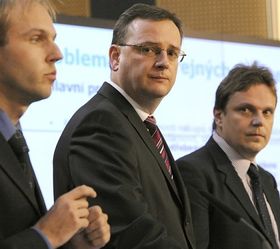 Petr Nečas (center), Pavel Kohout (right), photo: CTK “There are many big projects that were launched without an expert assessment. So we proposed the creation of an expert board that would conclude whether a project is or is not necessary; this should apply especially to infrastructure projects.

“Another proposal focuses on the so-called admission criteria. These now function as a secret filter that limits competition. It is now possible to shape the criteria in a very flexible way so that only a few competitors, even a single one, are admitted, which effectively limits competition.

“NERV has proposed reducing the criteria to a mere two – the financial stability of the applicant and the applicant’s knowhow.”

You have also proposed increasing the transparency of the whole process. How should that work?

“Transparency is generally a very powerful way of limiting waste in public spending. There are examples of some small Czech towns and cities that have conducted all of their tenders through on-line auctions. If this was applied on the national level, it would make the public procurement process much more transparent and there would be more competition in all tenders.” 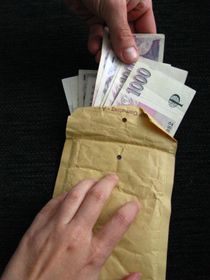 Prime Ministers Petr Nečas said he would like to see these changes implemented as soon as possible. When do you think that public tenders could be run according to these principles?

“Well, assuming that there would be changes to the existing law, it might take some six months, but that’s a very rough estimate. I’m not a lawyer or a politician but I believe that this time next year, the fundamental changes should be completed.”

Ahead of the 30th anniversary of China’s crackdown on peaceful pro-democracy demonstrators in Tiananmen Square, Radio Prague spoke…