For some 1,300 workers last week as well as the Czech government the suspension of production at the country's LG Philips Displays plant - the 2nd largest investment project in the country - came as a shock. With parent company LG Philips Displays Holding filing for bankruptcy, the obvious question was: would the subsidiary company follow suit? The Czech government - specifically the Ministry for Industry and Trade - has been trying to prevent just that. 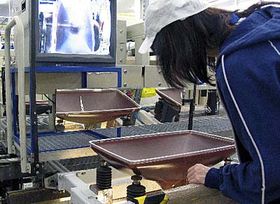 Photo: CTK Five years ago LG Philips Displays in Hranice, Moravia, was one of the big success stories of former Prime Minister Milos Zeman's government: millions of euros in investment in a region with high unemployment. The government had offered all manner of incentives to attract the investment, worth 1.3 billion crowns. Today, it's all hanging by a thread.

With Philips and LG cutting their losses in the venture, in favour of LCD and plasma screens, the company's Czech subsidiary, which produces traditional cathode tube TVs, found itself cut off last week and facing a dim future. This compelled the Czech government to act: the region could ill afford to lose 1,300 on-site jobs; countless more local suppliers would be devastated by the factory closure.

Ivo Mravinac is the spokesman for the Ministry of Industry and Trade:

"Right now there are possible solutions on the table, the two most realistic being: either securing an export loan from the Czech Export bank, or bringing in a state-firm, known as Osinek, to buy material and pay LG Philips Displays only for production. That would keep the firm going. But, negotiations are underway and nothing has yet been confirmed." Photo: CTK Whatever action it takes, the government is looking for solid guarantees. This is especially true should it extend an export loan - estimated at 300 million crowns (the equivalent of around 13 million US dollars):

"Such a loan could be risky, but according to the firm's contracts - and these need to be verified, of course -- the plant has orders two years in advance. It is operational. If not cut off from the parent firm, it would not have stopped."

Along with protecting jobs, the government is ultimately hoping to protect the state's investment, given that in the deal that brought LG Philips Displays to Moravia the company received generous incentives worth more than one billion crowns. In return, LG Philips Displays is legally-bound to a number of long-term agreements - commitments that would be impossible to honour if the firm ran aground. One, it is required to employ more than 3,000 workers by the end of 2007; two, by that deadline it needs to have retrained 2,000 workers; and three, by 2010 it is to have invested in a technology research centre.

On all those points so far, the company has fallen short. It has, however, made good on an agreement to invest a minimum of 200 million euros into the factory: in fact it invested more: 350 million. 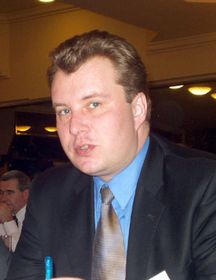 Martin Kocourek Still, regarding incentives, there has been no shortage of critics among the Czech right-of-centre opposition, who point to the "collapse" of the Moravian plant and necessary "bail-out" as the result of policies of the ruling centre-left Social Democrats. Martin Kocourek, an MP for the opposition Civic Democrats, suggests attracting foreign investment largely on the basis of incentives is a strategy that does not always pay off.

"Investment incentives aren't a panacea for the Czech economy, and we've been quite sceptical of their prevalence under the Social Democrats. As we see now, they are not without specific problems, such as when a parent company decides to pull out. Who pays the bill in the end? The taxpayer."

Paradoxically, with the government ultimately helping LG Philips Displays out of a rut, the Czech branch may soon be left the "last man standing" even as other LG Philips manufacturers - in Germany, France, Slovakia, fold. That is likely to give the firm here an unprecedented boost. The Ministry of Industry and Trade's Ivo Mravinac again:

"There still is a demand for cheaper products - for cathode tube TVs - in parts of the world, at least for now. Given developments, they could continue to be produced here. Of course, in the long term there's less of a prospect, but then, it's up to the firm itself to be able to adapt. That's no longer the responsibility of the government."

In the business news this week: Czech foreign trade shows its first ever surplus, the Finance Ministry raises its GDP growth forecast…

The Czech Ministry for Trade & Industry has been taking steps to try and help LG Philips Displays, a plant in the region of eastern…

The government is willing to provide assistance to Dutch company LG Philips, which shut down a factory employing 1,300 people in Moravia…