Tortuous negotiations on who will fill key posts in the new centre-right cabinet appear to have ended in agreement, with the final pieces of the jigsaw falling into place for new prime minister Petr Nečas. His Civic Democrats seem to have made considerable concessions, with the powerful ministries of finance, foreign affairs and the interior all going to smaller coalition allies. But surprisingly – and for the first time in eight years – there’s not a single woman amongst them. 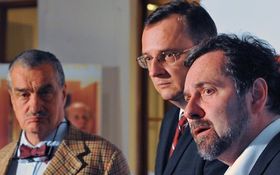 Karel Schwarzenberg, Petr Nečas, Radek John (left to right), photo: CTK Petr Nečas now has what looks like a cabinet, after eight hours of talks with his coalition allies – the right-wing TOP09 and the centrist Public Affairs. TOP09’s Miroslav Kalousek will get the finance ministry, the party’s leader Karel Schwarzenberg will become the next foreign minister, and most controversially, Radek John, the politically inexperienced leader of the Public Affairs party, will become interior minister, despite repeated concerns from Mr Nečas about Public Affairs’ links with the private security firm that sponsors it.

The Civic Democrats’ key portfolios will be industry and defence, although as Mr Schwarzenberg pointed out, it is TOP09 who will carry the greatest burden, as they’ll be in charge of health and social affairs, where unpopular cuts are expected. 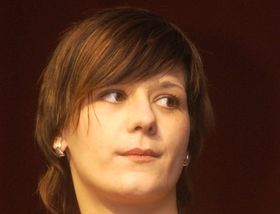 Jana Ciglerová, photo: CTK But there was dismay for those campaigning for greater involvement of women in Czech politics, after not one post was given to a woman,for the first time in any Czech cabinet since 2002, and despite the record number of newly-elected women MPs. Jana Ciglerová writes about women’s issues for the newspaper Mladá Fronta Dnes:

“It’s an absolute slap in the face I have to say, after all those headlines we saw after the elections that women are now leaders of the Czech Republic. To have a government that has absolutely no women in it is shocking. It’s the third millennium, and yet half of the population is still not represented in the government. It’s appalling.”

Public Affairs leader Radek John was quoted as saying that there are no women in the government because they were put off because the coalition negotiations were so tough. What do you think of that? 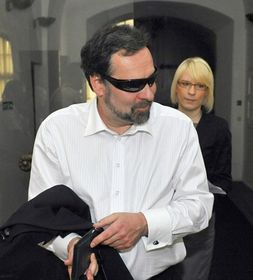 Radek John, Kristýna Kočí, photo: CTK “Radek John has by his side one of the most politically educated people on the Czech political scene [the party's programme manager Kristýna Kočí]. She is more ready for tough negotiations - and for leading - than he is. To say something like that when he has had a woman by his side all during the negotiations is…shocking. I’m sorry, I’m lost for words. It’s shocking.”

All three parties have expressed regret about the lack of female ministers, and some political analysts say they might indeed live to regret it. Certainly it’s a striking contrast with neighbouring Slovakia, a country about to get its first female prime minister. 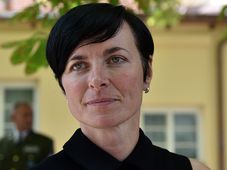