Mene Tekel, Prague’s annual international festival against totalitarianism, opens in the Czech capital on Monday afternoon with a concert by Jaroslav Hutka and the Blue Effect band on Old Town Square. Now in its fourth year, the festival offers a week full of debates, films screenings and a number of rock concerts.

The Mene Tekel festival takes its name from the so-called writing on the wall, which appears in the Book of Daniel and refers to the counting and punishment of evil deeds. One of its main aims is to recall the crimes of the communist regime and allow people who experienced communist oppression to share their memories with those who are too young to remember. Artist Jan Řeřicha is one of the festival’s organizers:

“The festival’s main theme this year is intellectual resistance against totalitarianism. This can be shown on the case of Professor Růžena Vacková, who sympathised with students who supported president Beneš during the Communist putsch on the 25th of February 1948. As a result she was sent to prison for 25 years and she was released only in 1967.”

To remember the personality of Růžena Vacková, Prague law students will reconstruct her trial in the building of the High Court at Pankrác. The programme of the festival will also include the screening of communist propaganda films and a series of concerts, featuring bands that were persecuted under the communist regime. Jan Řericha outlines the highlights of this year’s event: Růžena Vacková “Every year, we organise special days dedicated to a certain post-communist country. This year, there will be a German day, held under the auspices of the German ambassador to Prague. On Thursday, we will have an Albanian day with a special guest, Tomor Aliko, screenwriter, writer and a hero of Albanian resistance. We will be screening a very powerful documentary called Prison Nation, for which he wrote the screenplay and which brings evidence of terrible crimes committed by the communist regime.”

The Mene Tekel festival runs until February 28. For more information, you can visit the festival’s website at www.menetekel.cz. 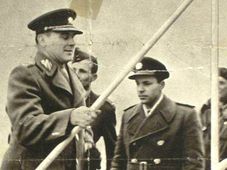 The early years of Czechoslovakia’s Communist regime were marked by hundreds of tragic stories which revolved around injustice, torture…