For years Czech football has been dogged by allegations of corruption at the highest levels - many fans believe the beautiful game is rotten to the core. On Wednesday there was some satisfaction for those who want to see the game cleaned up. The former president of Viktoria Zizkov, Ivan Hornik, was given a suspended sentence and fined almost a million crowns on match-fixing charges. 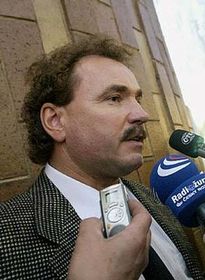 Ivan Hornik, photo: CTK Ivan Hornik is sartorially striking - the former club boss boasts a permanent tan which he certainly didn't get in Zizkov, a rather dodgy moustache, an even dodgier curly perm and some very loud suits, all topped off with a lot of gold jewellery.

But it's Mr Hornik's language which has earned him enduring fame among the Czech public. He was sentenced thanks to a series of police wiretaps in which he was caught discussing bribes to throw matches with fellow officials and referees, and those wiretaps make highly entertaining reading.

Those caught on tape used a series of coded references to the bribes, so a kilo of apples was a hundred thousand crowns and so on. However he and his partners in crime also employed the most astonishingly crude Czech imaginable. In fact the police transcripts were so entertaining, two popular Czech actors turned them into a stage play, which simply features them reading them to the audience.

Ivan Hornik wasn't the only person to be convicted over the Viktoria Zizkov match-fixing scandal. Ten other officials and referees were also handed down suspended sentences and fines, and were all banned from the game for several years. Unfortunately the Zizkov scandal was not an isolated incident - the courts have recently handled a string of cases against officials and referees, reinforcing the popular perception that Czech football is rotten to the core. Ivan Hornik and Viktoria Zizkov is just the tip of the iceberg. 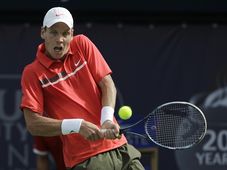 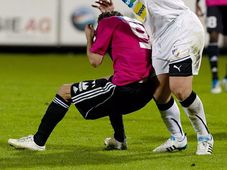 In today’s sports: Petr Čech gets the all clear after an injury scare, the weekend results from the Czech Gambrinus league and disappointment…